I am a brand new member and have just gotten into Bonsai, this is my first post

. I acquired a Jade Tree over Easter weekend. Since getting it home, I have noticed that several leaves falling off. I read that this happens many times when a tree is brought into a new environment. I have only watered this plant once because it is a succulent. More recently, I have noticed some of the leaves turning dark and shriveling. There are also a couple of leaves with a single red fleck in the center of the leaves. The leaf drop has increased. The tree is very root bound. The whole clump is easily lifted out of the pot.

Any thoughts on what is going on? Should I try and repot it to see if a better draining substrate will improve its condition? I am worried that if I don't act soon I could lose the tree. Thanks in advance for your thoughts. 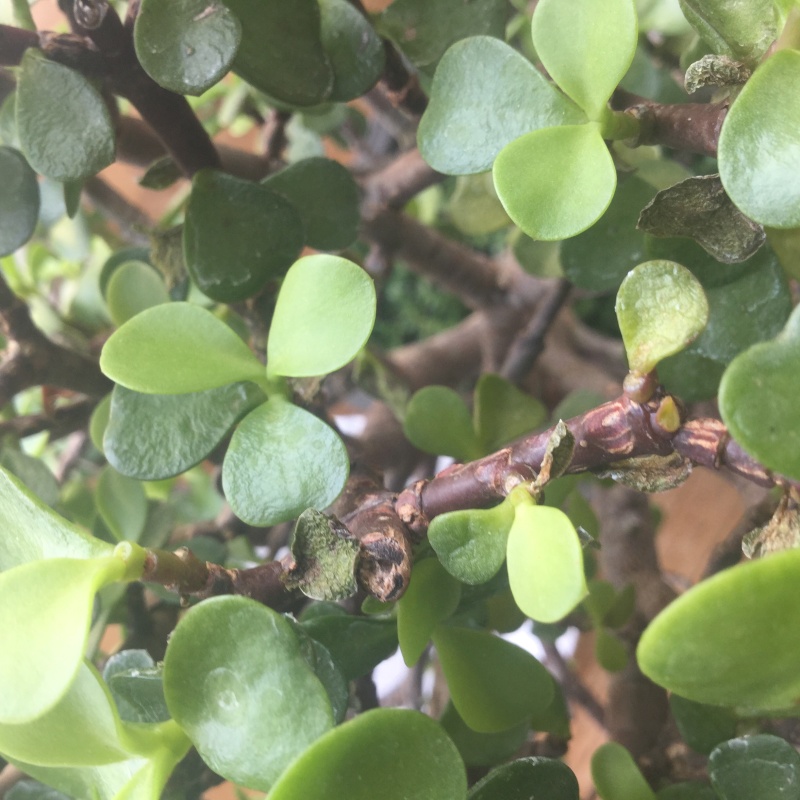 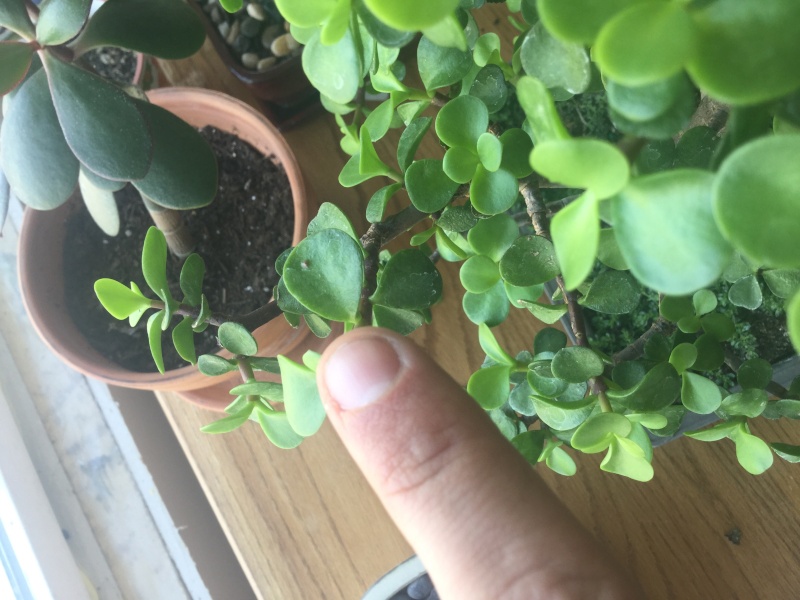 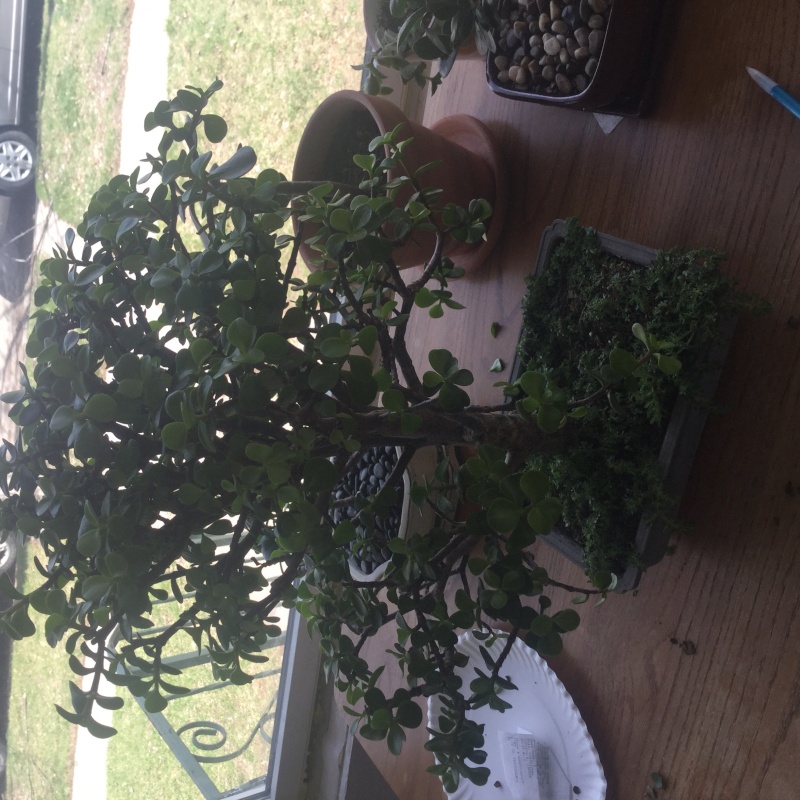 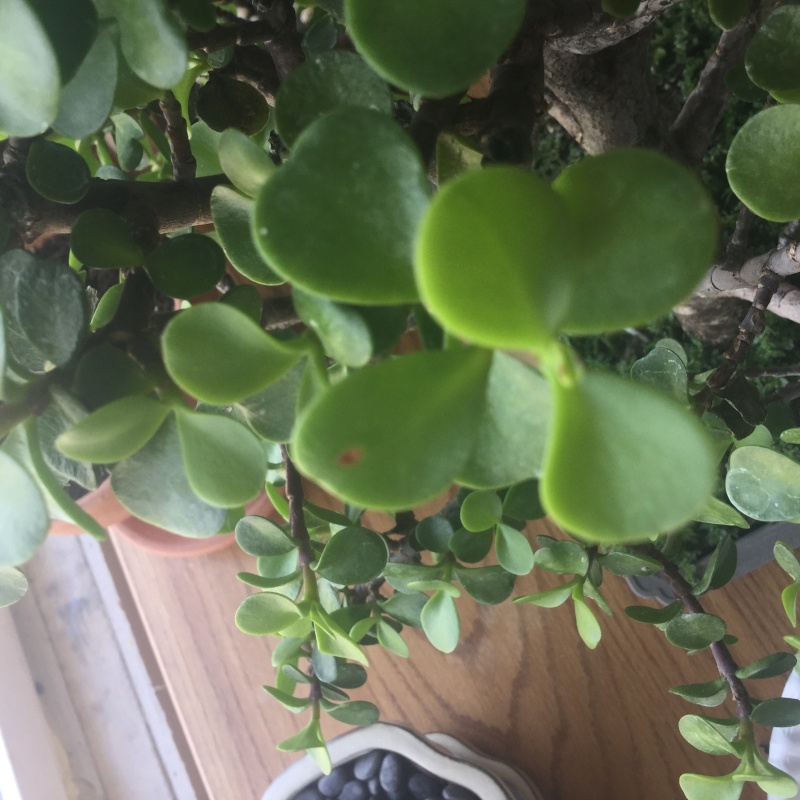 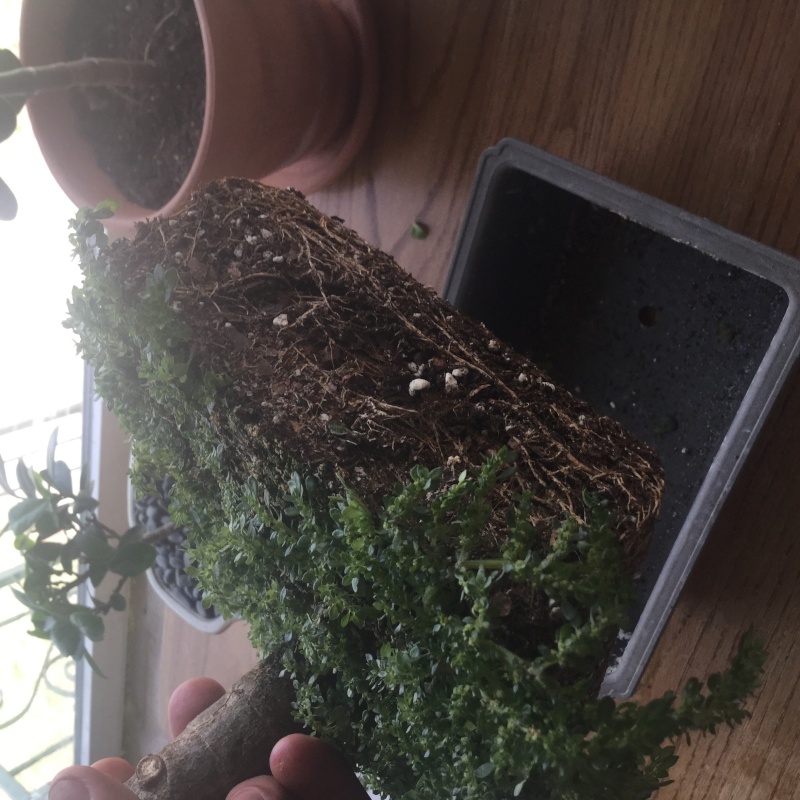 Welcome! Someone else will have to talk about pests- I'm not that guy. The leaves you show look shriveled and needing water. There's only one reason for that- they need water. There are a couple reasons they aren't getting water- one, there's no water at the roots or two, there has been so much water at the roots for so long and so much root has died that there is no longer any way to transport the water to the leaves. (I've never had any pest eat my jade plant roots, but I guess that has to be considered also.)

For an established jade, watering approximately 10 days previously should make a healthy plant happy. But did you water thoroughly? If it was very dried out, the soil could have been hydrophobic and a 'small' watering effort could have left the plant as dry as when you started. When you pull the entire root ball out, is it soggy or dry? If bone dry(I mean dust flies if you disturb it), water til its running freely from the drainage hole. Wait several minutes, then repeat twice more. Inspect the root ball, and repeat until the roots are well soaked. Then see if your foliage looks better in a couple of days.

The worse case is if all is soggy in the soil, and roots are dying. "Water water everywhere, and not a drop to drink". In your pictures it looks like you have potting soil in there, not the best substrate for a jade. It also looks like there is a top cover to help hold moisture in. If it's a soggy mess, do a little digging to see if any roots are soft, mushy. Also, feel the trunk and see if there are any soft spots. If either one is true, it's a sign of rotting. The definitive action at that point would be to remove all soil and cut away all unhealthy roots. Then let the plant rest with the roots exposed to dry out for a few days before planting in a more free draining substrate.

That's my two cents. Post what your investigations reveal.

Oh, and it looks like a nice tree. Maybe you could post some ground level shots with a light colored background so we can see it better.

Here is a picture of the whole tree. 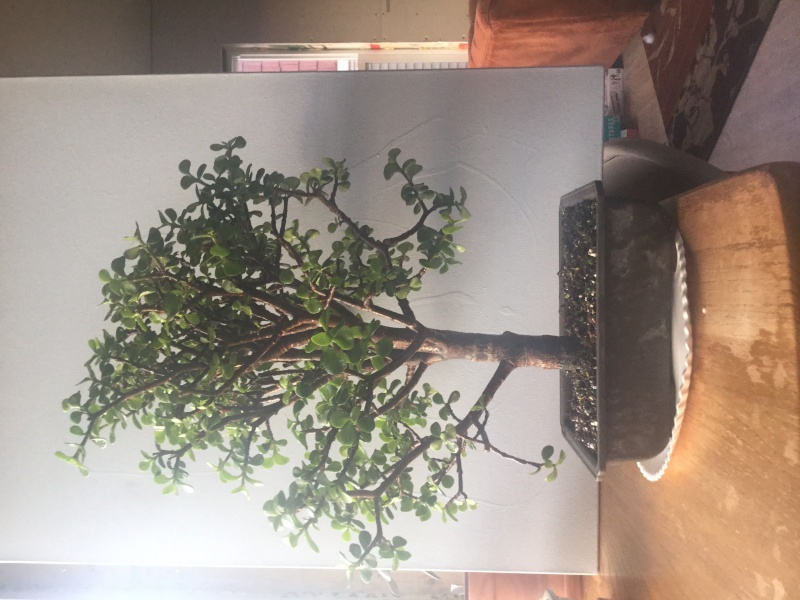 I pulled out the secondary plants in case they were taking any of the water from the tree. I also watered it like you said. Sprayed some neem oil on it just in case of insect problems. I didn't find any "soft spots". I also agree, the soil is terrible. I do have some bonsai mix, but am nervous to transplant the tree due to its health, but if it isn't getting adequate water, I may try and repot it sooner rather than later. Thanks for the reply precarious!

Sorry that the picture is sideways

I would say limit the watering. Once you have watered well leave it be until the leaves begin to shrivel a bit. Jade does much better when it is drier. You could repot now but be careful of over watering. I have a jade forest that I water maybe 3 times during the winter. Between watering the leaves become quite shrivelled and a few may fall off but over watering will kill a jade plant quickly. It will also build a better root system in dry conditions as to roots extend looking for water. If you can put it outside when the temps at night are around 50 that will greatly increase the health.

At least you took off the hedging!! But now it's planted sideways!! Seriously, that stuff was probably keeping your soil a little damp. I've got two of these, and surprisingly, their pretty thirsty. Relatively speaking. Hey, where is the self-professed "King Spekboom", BC Snake? Shoot 'em PM, he's cool and could help ya' out, brah. Outside, here I come......

WHOM DARETH CALLETH FORTHETH AND SPEAKETH THE NAME, SPEKBOOOOOM KING

don't panic yet... first off, thats not a true jade, so when looking for info, it is a portulacaria afra,
which is also known as spekboom in it's native afrikaans and the commoners may call it elephant bush

you did well to get rid of the cabbage on top... the other advice given is good...

not much to add except i would go ahead and repot it but only do minimal root pruning (unless they look/smell rotted...)
you may end up retaining some of the soil its in, but that okay... the main thing is get it into some better draining soil as much as possible and once its back in the pot, use a chopstick to poke and work some of the good soil into the stuff you retained... but then you dont need to repot it for quite a while because spekboom like "tight feet"... so don't sweat the root-boundedness

all that being said, i have noticed the exact same condition on one of mine (minus the red speck) that i have been letting run long and wild in order to create a cascade... i think in my case, as it is in a very small pot, that it is losing some leaves because it has too much mass to support, given the small amount of water the small amount of soil can hold... so i have whacked it back some and am thinking that might help... and yours looks like it could use a haircut...

(and actually there are folks on here that are much more knowledgeable than i about these...
like folks that are actually from africa... but the crown was up for grabs, so i grabbed it

i am now following lance outside where i have work to do and cold ones to consume !

SO IT IS WRITTEN AND SO IT SHALL BE DONE !!!

Thanks for the info Kevin! Is there a certain soil mix you prefer for the portulacaria afra? All I have on hand is a store bought "bonsai mix."

they dont seem too picky, so that should be fine...

my cuttings go into dirt mixed w/ any old used bonsai soil... then at first proper potting, they go into a mix of diatomaceous earth (in the form of "napa oil dry"), chicken grit, pumice if i have it and composted pine bark... pretty close to even amounts of each except for less chicken grit... i might start swapping out the chicken grit for lava when i can find a steady supply of the nice small stuff... also currently looking for a sub for the pumice... it is too white for my liking... and that is pretty much my soil mix for everything w/ the biggest variable being less pine for ones that like it drier and more for those that visa the versa...

LaCrosse s/b a good area for collecting wild material !!!
go get some !!!

I had a similar problem with a crassula ovata golem. I thought it needed watering but upon inspection it turned out that the roots were waterlogged and had rotten completely. The retailer or whoever had potted the plant had put it in pure sphagnum moss. Watering more was just causing the trunk to rot. To fix the problem I removed all of the moss and rotten roots. Then I left the plant upright in an empty plant pot until new roots sprouted from the bottom. By this time the leaves were completely shrivelled and raisin-like. At this stage I repotted the crassula in something with a lot more drainage and watered thoroughly, only re-watering when the soil was bone dry. In this way the leaves quickly regained their plump state. Now the plant is only watered if the leaves start to wrinkle again. So far this has only been when I removed some larger leaves and some moisture was lost through the wounds.