Here Is a pic from the spring when the flaws were more visable. Sometimes I regret the chop I did for this apex. It did eliminate a long straight section of trunk, which is generally a good decision, but now I am left with a straight saw's attempt to adjust the taper to the chop, when a stump or hollow could add interest. I'm not too worried even though a stump is no longer an option, but this heals wounds very well and worst case, I Just hide everything with foliage. But , should I go for a hollow? 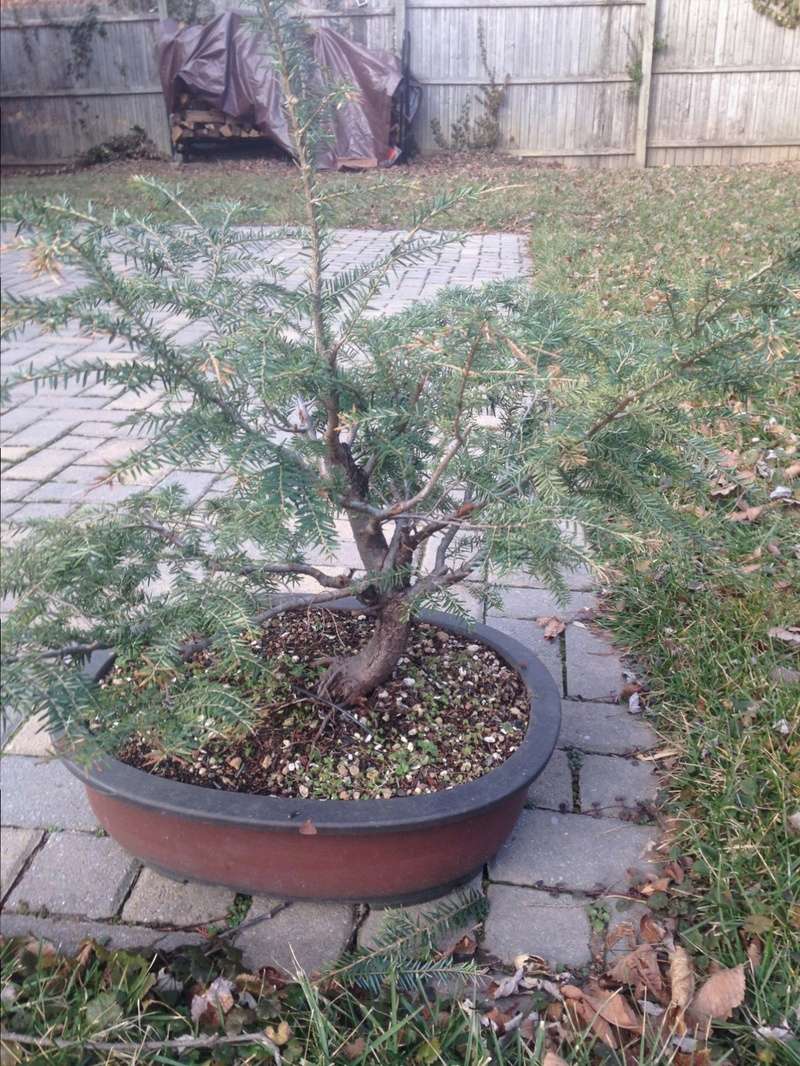 Hollow at this point might not work very well. You can "nibble away" with diagonal concave cutters or other tools to shape the chop a bit better.

Hiding chops with foliage is a time honored technique, used by many.

It takes practice to do chops, carving and creating hollows, unfortunately most of us don't have the quantity of stock needed to get the practice we need.

Fortunately, trees can and do heal themselves. Time may take care of it.

i would just save the hollow as a plan B in case the foliage doesnt end up doing the job you want...

Here are a few updates on this Tsuga. Some may be happy to see some real wire on there as I brought this to a workshop with Roy Nagatoshi. I was satisfied that the guy wires "held" the bends pretty well within a year.  I think it helps that it put on a fair amount of growth even if I was trimming off redundant bits periodically.  However per another related thread my plan for this year is to slap myself when ever I get the itch to pick up the shears.  I'll have to be real careful to check that the wire isn't biting in, however.  I may also re-apply the guy wires for just a couple of the lower branches.  The thickest wire, really couldn't hold the bend, and the pair of lower branches could use some lateral adjustment.

Further down the road, I want to search for a better nebari on the next repot in a year or two.  I think there is something really nice hiding underground, but was quite timid as to how it would respond on it's first containerized repot in 2015. A post earlier in this thread has reminded me that I could have been much more aggressive with the roots.   Seriously a month and a half between those two photos? I may have to get Rick Moranis to bring over his chain saw to help with the repot.

Also in the next year or two, I'd like to attempt to air-layer off the apical sacrifice branch. I've collected seeds, purchased seeds and sown seeds but so far, 0% germination rate.  I have really bad luck technique with seeds in general, but I'll keep trying.  Based on my experiences with this one, I think it would be fun to beef up some shohin hemlock.

Stylistically, I am thinking I need to do something about the crossing branch, but I haven't committed yet. I have always been drawn to it as a rule breaking branch if it were in front in the second photo.  But the apex now look much better in the first photo(chop not visible) and from that side, the crossing branch only adds reverse taper. Master Nagatoshi (again) recommended jinning it but I compromised by further reducing it for now.  I'll give it a couple more years while I sort out the nebari and as the apex develops. I'm also not ruling out a more radical redesign, like moving the apex down a branch and maybe doing some in-arch grafts to bring in a few branches, but that is more like the 5 year plan if I am unhappy with how this design is developing. 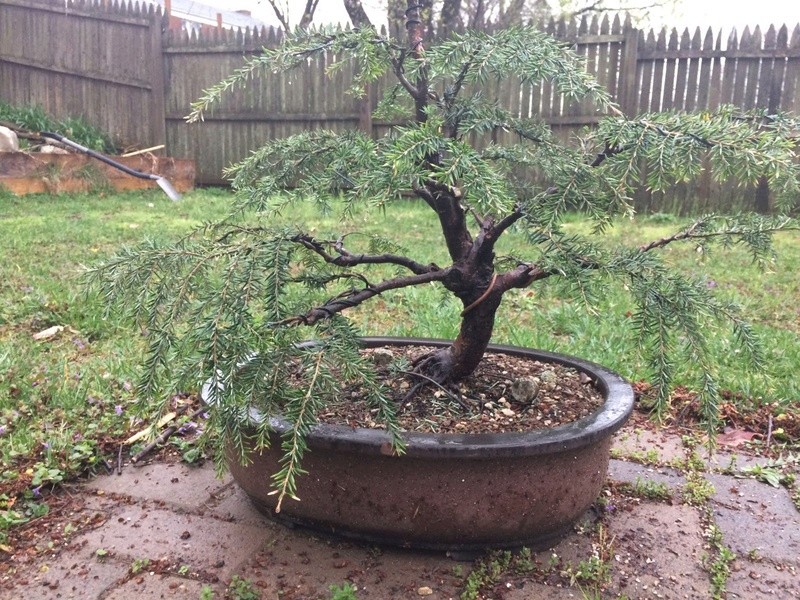 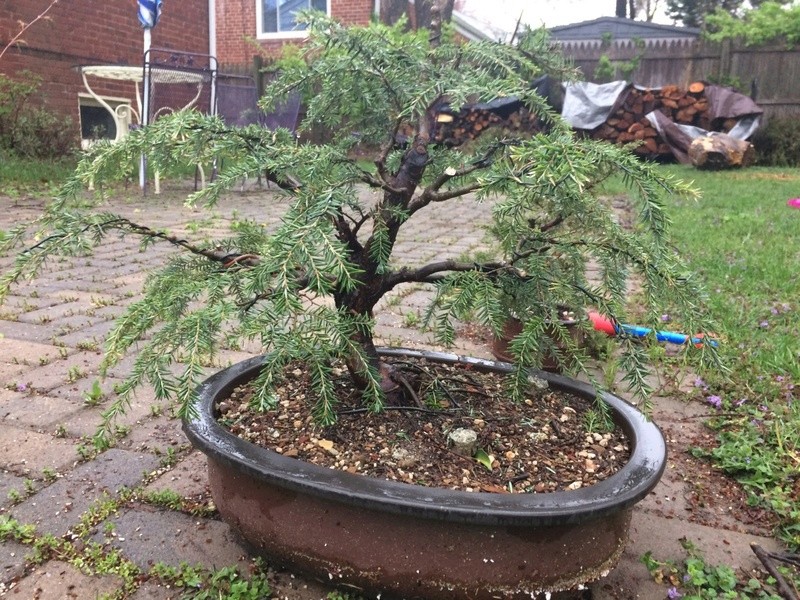 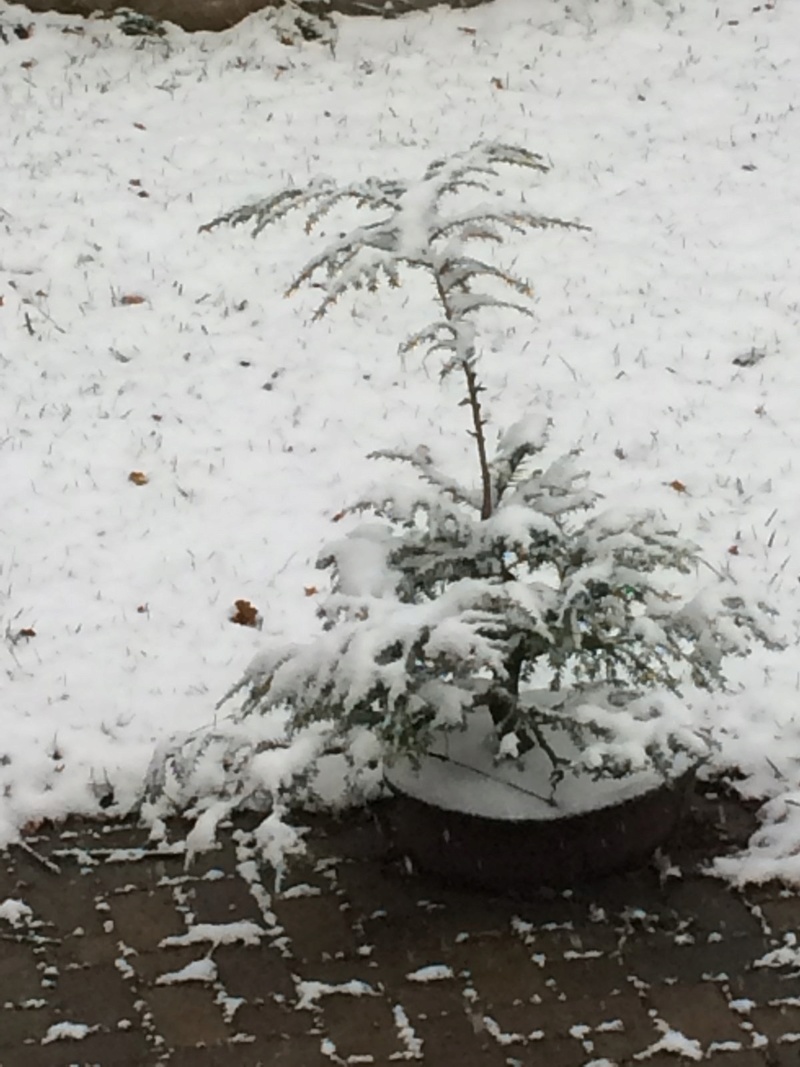 I did a good job of putting down the scissors for the growing season, and then really laid into it this winter, hoping to set up for some prodigious back-budding, but I forgot I was hoping to repot into a Sara Rayner pot this Spring. I suppose there is no rush, but besides going shallower, I really need to figure out if there is a better base hiding under there before the flying roots cause to much of a bulge. 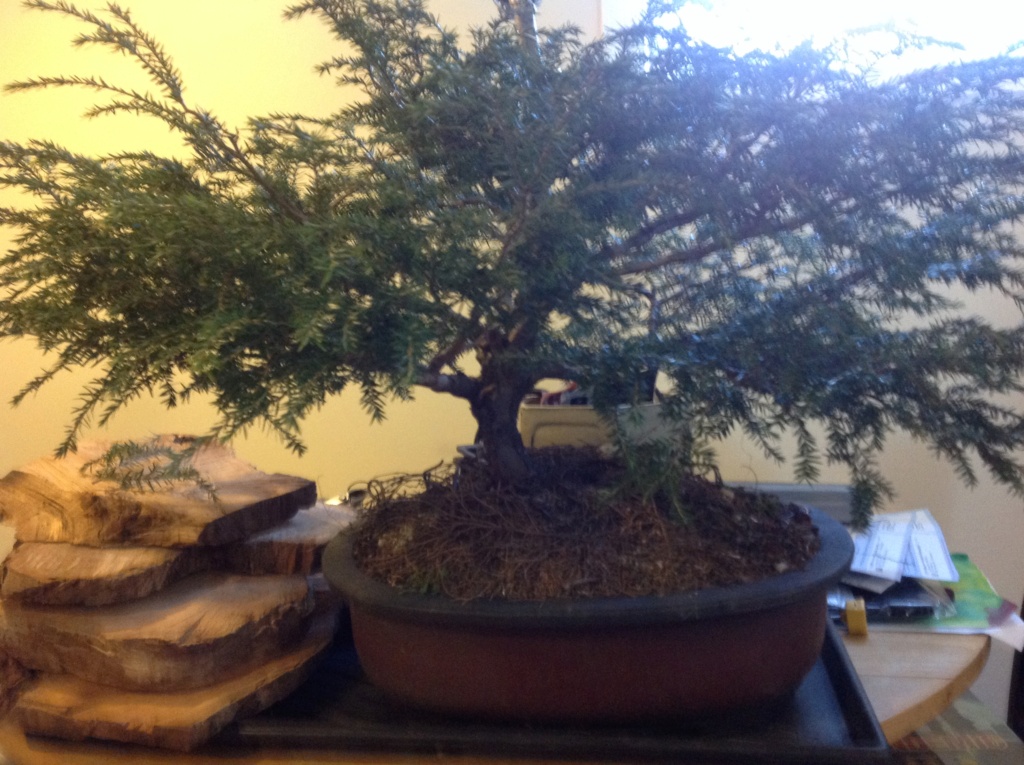 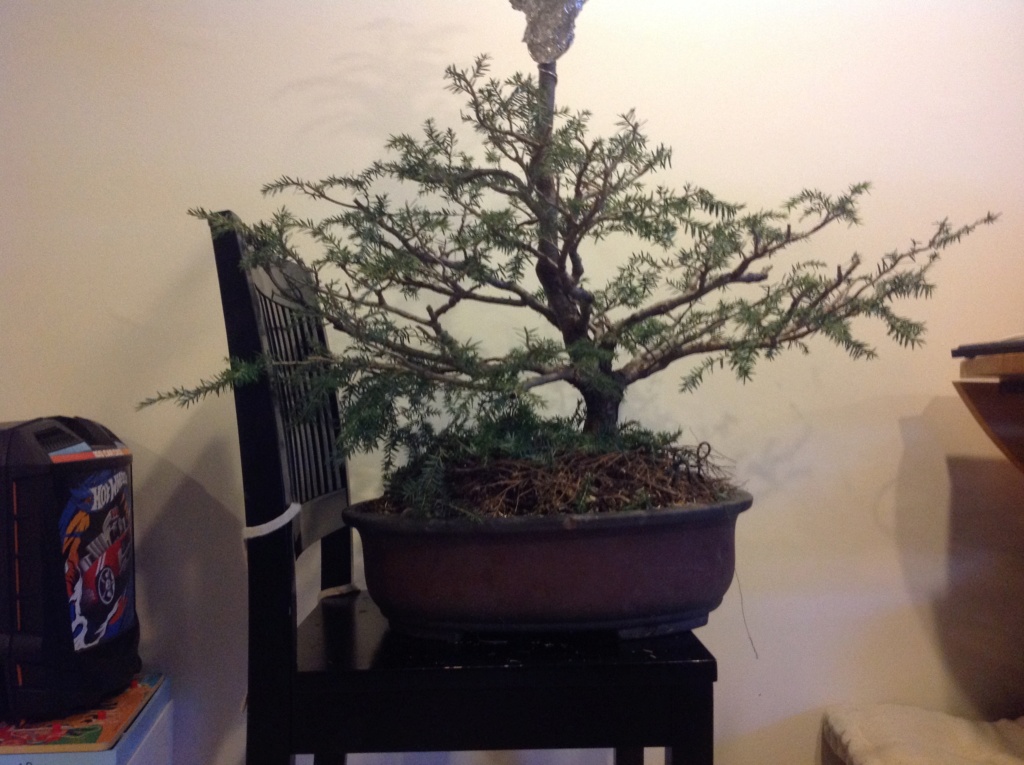 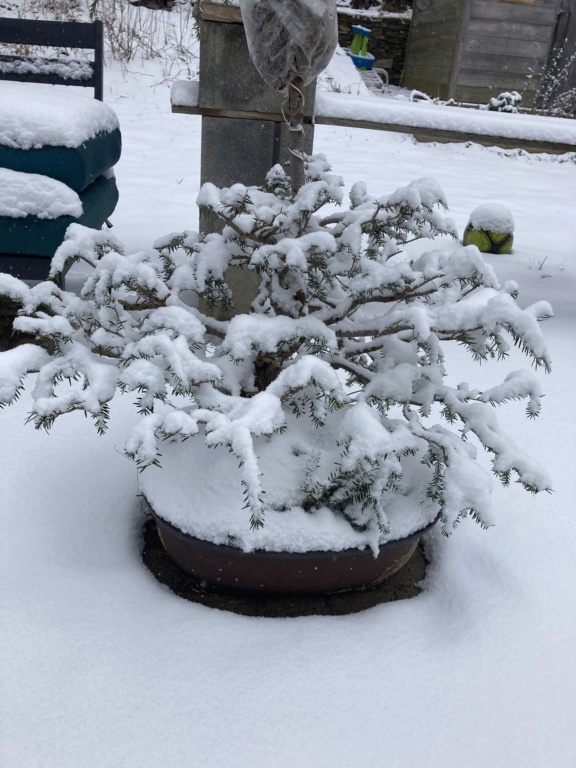 I repotted into a Sara Rayner pot a few weeks ago. The buds are just now starting to emerge. 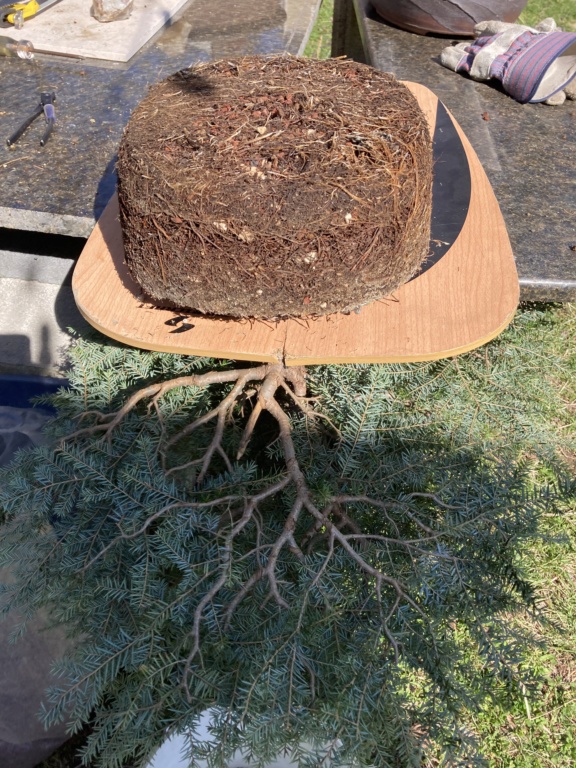 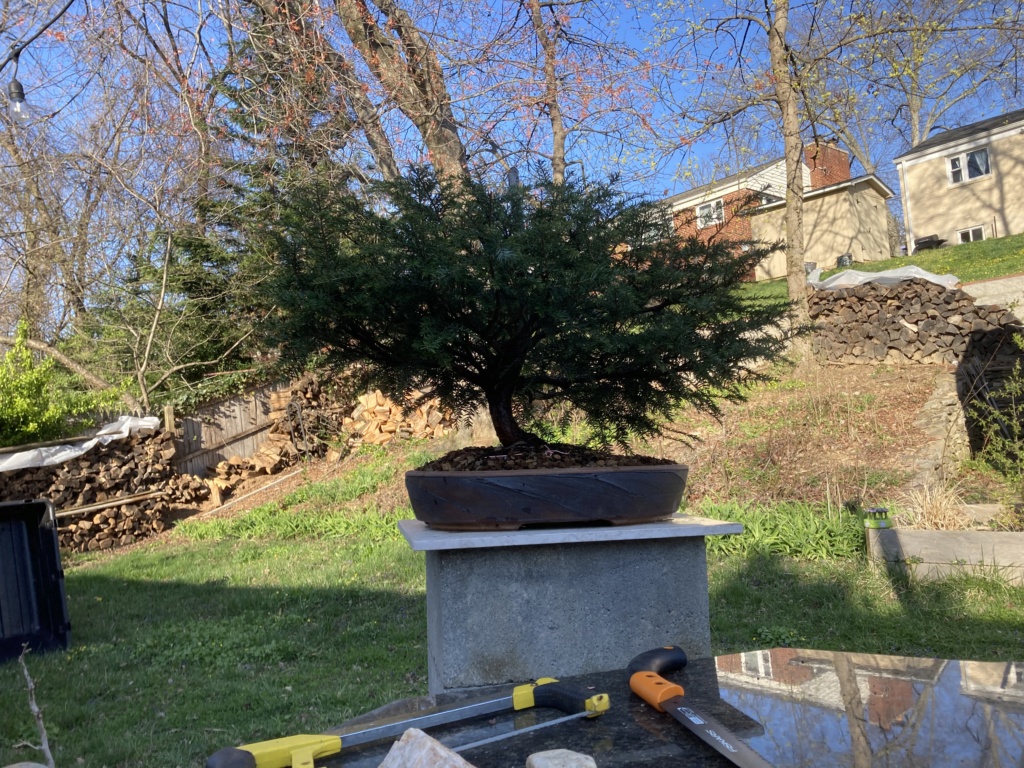 Nice choice of pot and nice tool for working the bottom of the root ball. I need to make something like that for my trees.