I have been working on this tree for about 4 years now. It is currently on display at the Denver Botanic Gardens fall show. Below is a photo of the tree before this summers growth was trimmed back and another photo of it taken by a proffesional photographer and used in an public broadcasting article and radio interview about Bonsai. 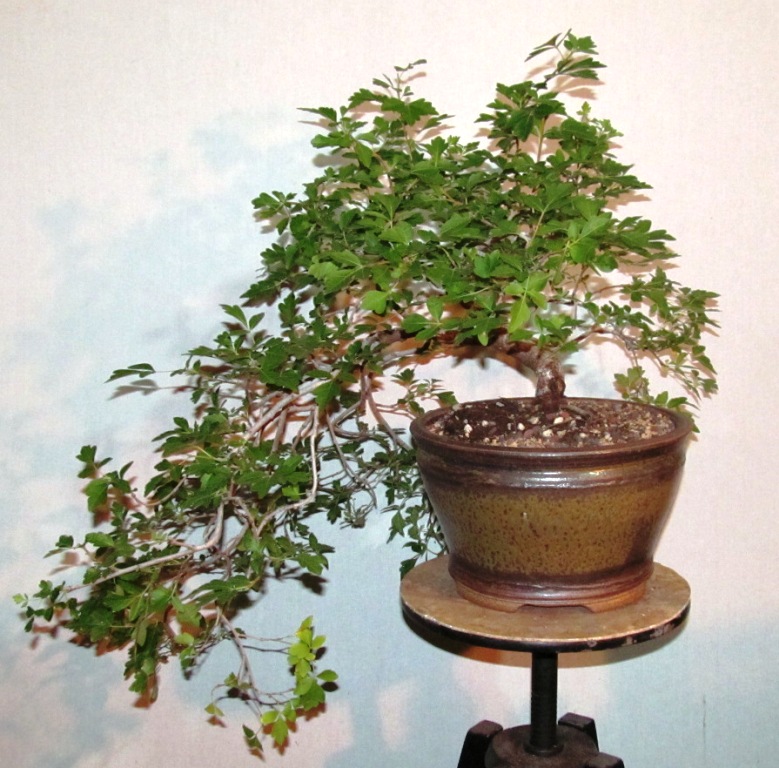 Credit for photo below: Art of Bonsai Has Long Roots in Colorado by Ryan Warner 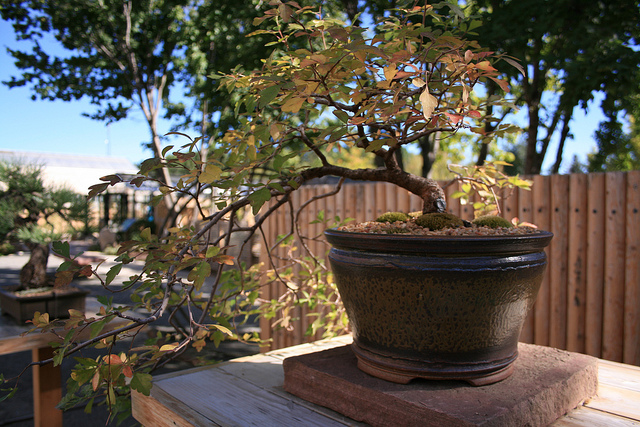 This tree has really nice creamy yellow flowers in the spring.

Fall colors just starting to really turn now. The bonsai specialist at the gardens told me this particular species was chosen to be a featured plant at the gardens in 2014. 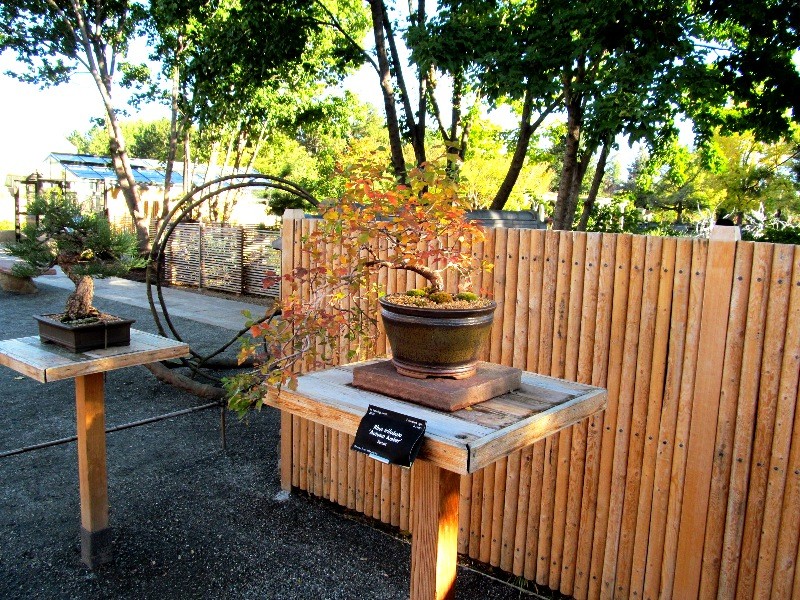 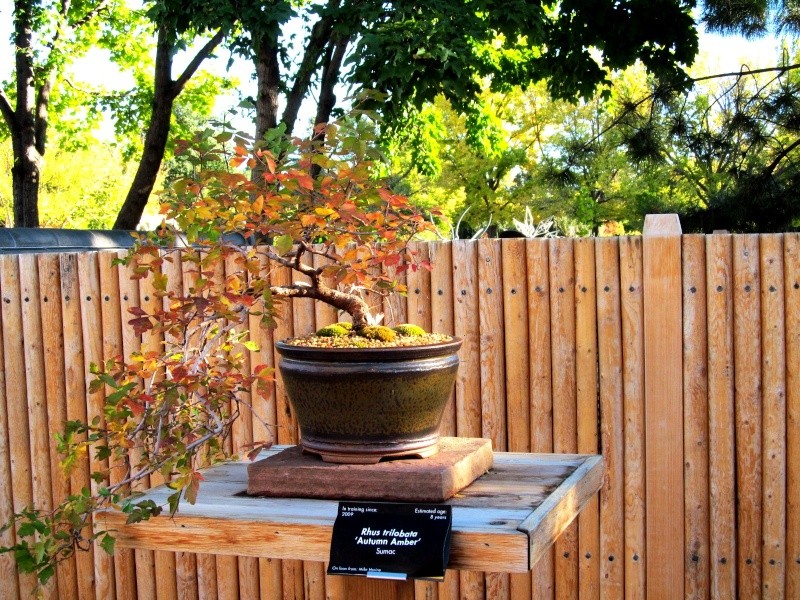 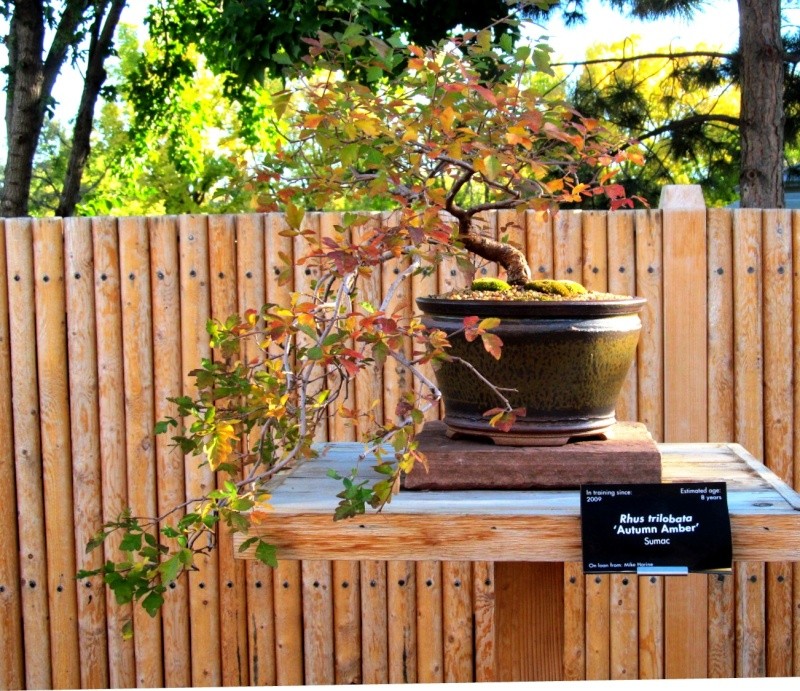 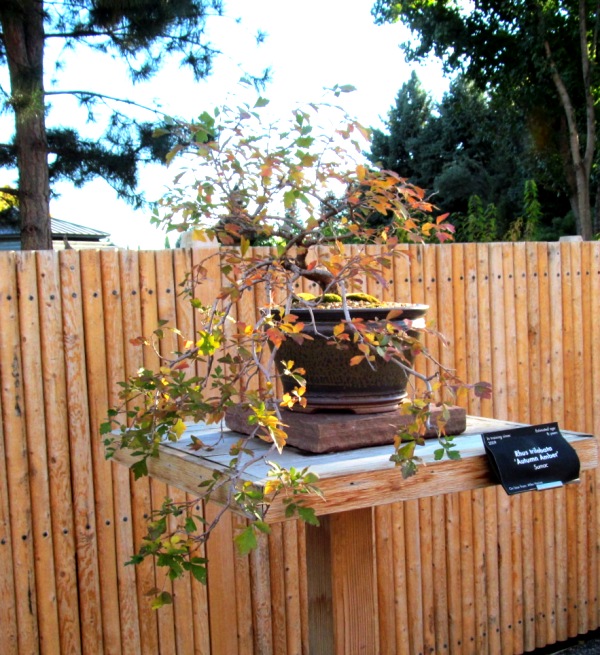 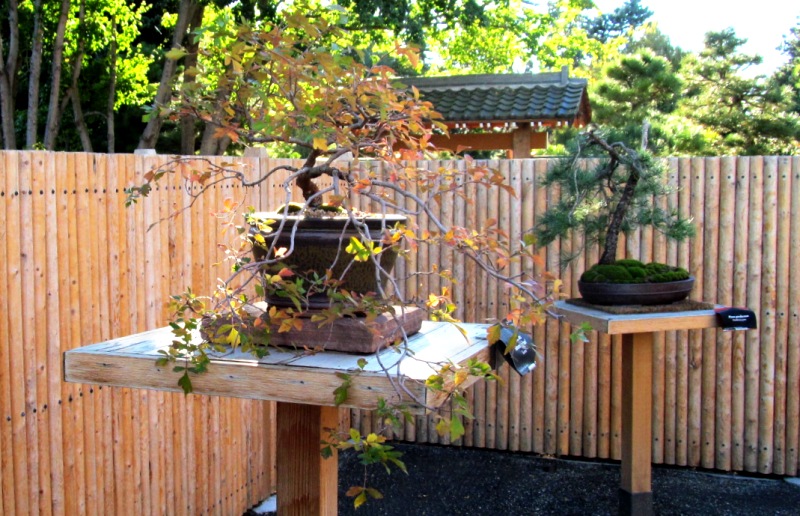 a pot for rhus

Hello, beautifull tree, it's just an advice, the pot for me seems too big, but it's a provisional pot may be, virtual photographie 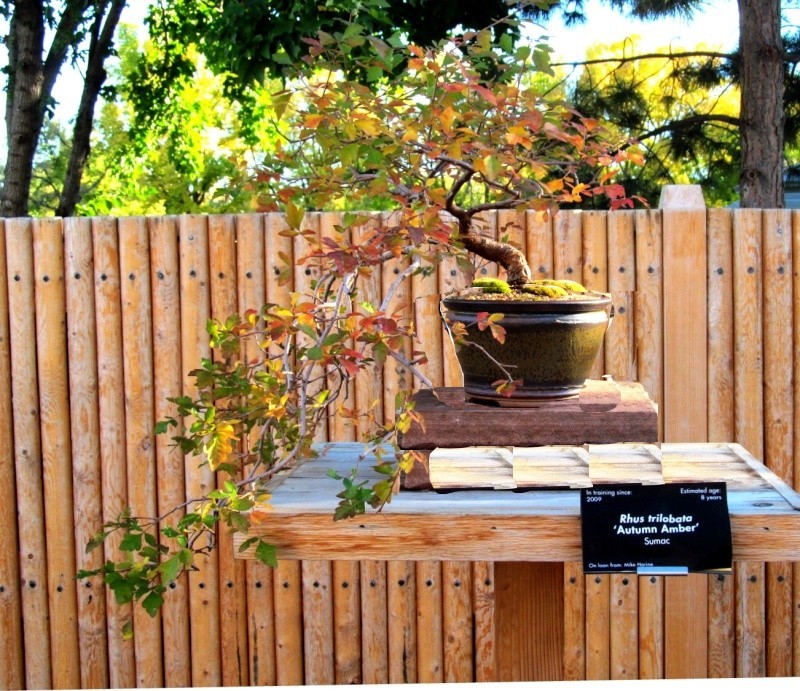 Interesting thought about the pot being to big. It took me a while see what you did?! I was wondering about the pot being to big myself. Well its going to have to stay in this pot for a while, it was just potted in it this spring. This is a fast growing plant even in a pot, it might get bigger on its own in a couple more years. I wired it 4 years ago in the spring and the wire was just starting to cut into the bark by the end of summer. The base of the trunk had a couple deep wire marks, you cannot see them now. They were gone by the end of the next summer. The branches set in one summer.

I am still realitively new at Bonasi and this is my first attempt at a cascade. So I was kind of guessing at the size of the pot.

Thank you for your thoughts on the tree. I will keep them in mind.

I saw a nursery sumac at a local nursery last week and it caught my eye. After seeing yours, I just might go back and buy it.

This is a nursery tree to. It had a better branch for the cascade part of the tree, but it died the first winter I had it. That's the only branch that has died on it. It likes trimming, I took off a big root from the side of the trunk and it did not bother it at all. I keep it in the garage sitting on a table with no protection. Its very hardy. Its get down to 15 degrees in my garage in the winter. The first summer I had it was bleeding sap on the lower trunk. The next spring it was still bleeding. I treated it with a systemic insecticide and the bleeding stopped. Not sure what was causing it to bleed, must have been some bug (RIP) of some kind. I have not sprayed it with anything since. Even the cutter bees leave it alone.

Thank for sharing your experience

Lovely tree, lovely color. I love the sumacs in the fall.

I do agree that the pot is quite a bit too large for the tree -- especially the trunk.
_________________
Jim Lewis - lewisjk@windstream.net - Western NC - People, when Columbus discovered this country, it was plumb full of nuts and berries. And I'm right here to tell you the berries are just about all gone. Uncle Dave Macon, old-time country musician

Thank you for your repsonse, its the type of feeback I am looking for. Its much appreaciated.

Hi Mike,
I bought the Sumac today; it is very similar to yours, with a bend low on the trunk. It too will probably be a cascade. Perhaps they can be "sister" trees one day.

Great news!!! Please be very careful when bending the branches, they are incredibly brittle. I was moving a branch around to see where to put it and it started to split off from the other branch. I put some cut paste on it, wrapped it back to together with black eletrical tape and secured it with a thick piece of aluminum wire (Ryan Neil grafting trick). I left it on for 2 years and it is holding together. Be sure to put cut paste on the large cuts it works pretty good on this tree.

This species has a nickname of "stinkbush". There is a mild aroma when the leaves are crushed or you get some sap on you.

I found another native Colorado sumac with the same 3 leaves on it at a nursey. It has a nice big trunk, nebari and should make a nice broom. It is just now starting to turn colors. I took off a big trunk when I got and chopped it back.

Its going to make a nice tree some day.

Here is an update on the sumac as it was displayed in the 2014 RMBS Tokanoma in June. I counted over 100 flower buds  on it now. It should look really good when in bloom.

I am sad to report the tree above has entered a permanent sleep pattern. The tree was lent to an outside organization to be put on display while blooming. The tree was returned to my half dead. By July it was completely dead. Knowing that this species is very hardy I must conclude it was not watered and suffered and permanent damage.

After several years searching for a new tree, I finally found one right down the street from. This new tree is actually better then the old one in its trunk and nebari. I styled the tree last year and left it alone. I potted the tree into a new pot this spring and wired a few branches. The tree is now starting to flower and bud out. It should look great.

Here is photo. There are more photos of the tree on my website. 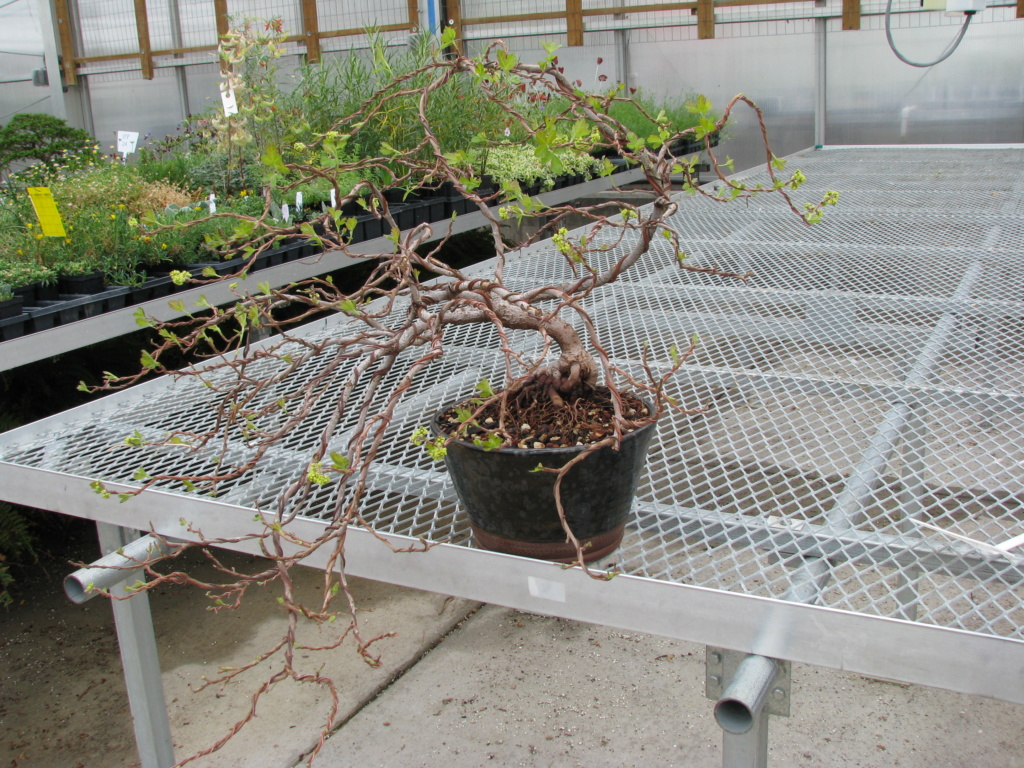 Thank you for this post.   It is a good reminder how the world behind the fence may look like.

Great looking new tree.  Very happy to see it.  Never thought about it as a bonsai...

Here is a new photo taken yesterday. The tree has filled in quite nicely. Mature bark should start to appear in 1-2 years starting from the bottom up. 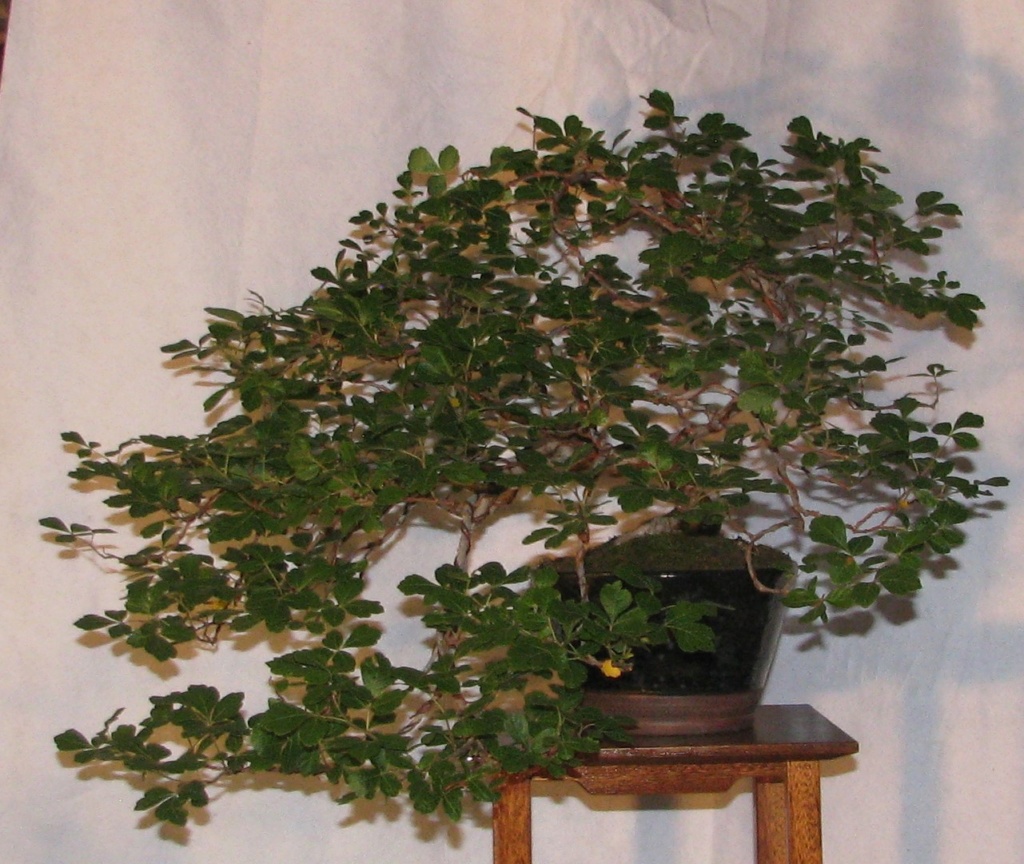