Here's one of my yamadori Colorado Blue Spruce bonsai (Picea pungens I think). This photo is after it's second wiring last weekend. 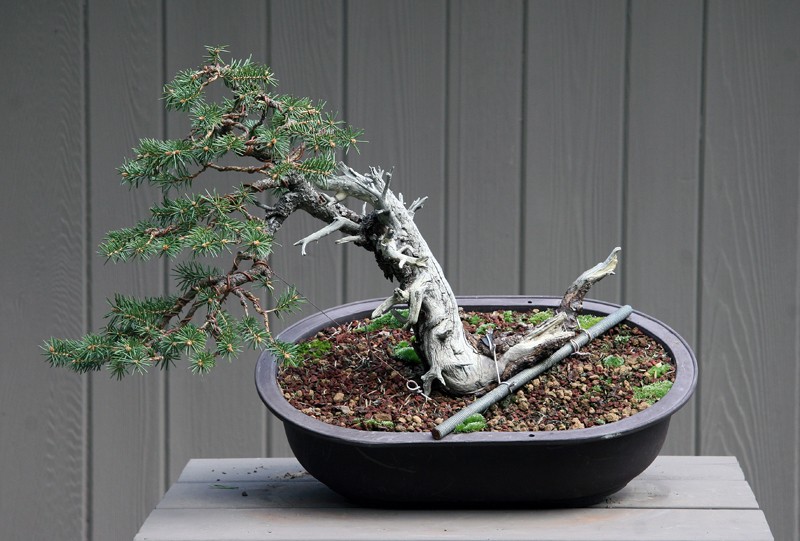 I first wired it last spring. Here's the progression from first wiring to second.

So IBC, I'm beginning to contemplate pots. I think I'll need it for April 2011. Maybe an unconventional pot with a raised wall towards the back and right side. What do you think? 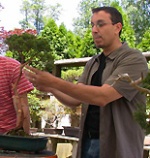 Hi Mike... Thanks for sharing-- your offerings are often among the best on IBC. This tree already suggest feeling that is rare, & the thread's presentation draws browsers lookng for it. Ken Burns's first two TV installments (continuing this week) on the National Park system open a softness toward unmitigated nature that this tree captures... with more individual dynamism and less "Sequoia grove/temple" sublimity. Perhaps, your bonsai will be a bit shy with capacity for shame, yet not feminine or blushing to its ears.

Looking to the future, there could be a healthy dose of flush foliage and energy... though you might choose the complete opposite with more uniformity to the trees early life and plot. Not every tree with a gnarly youth remains gnarly in maturity. Pushed growth & repeated chasing leave a mixed picture of life exceeding normal intensity & exceeding normal throttling. Choosing a pot (or other objects for display) could press mixed feeling(s) that are independent but felt together. The tone might not be complementary as in one emotion canceling another but piquant with conflict. Perhaps, it could suggest no easy resolution.

A quiet pot may already not be appropriate-- if the tree expresses shyness, it does so without bending its will. A strongly masculine pot similarly could over-emphasize one emotion related to the tree without capturing the tones of another strong (though not crisply opposing) feeling. Mixing the feelings in uniformity as a pot choice would not thoroughly carry the strength of life lived.

It belongs on more 'rock' than 'moss ball,' but I can't see far beyond those images in pressing its potential atmosphere-- recalling blades of grass as well as the resistance of wood against gentle breezes & heavy winds.
_________________
... visit the U.S. National Bonsai & Penjing Museum, Washington DC USA-- http://www.bonsai-nbf.com

Thanks Chris, I always know I'll get interesting feedback from you.

It's funny you mention the Ken Burns series. I watched an episode last night. I finished feeling deep gratitude for the people who created out national parks and saved so many precious resources we can now draw on for inspiration in bonsai.

The challenge with this tree will be maintaining the rough, tortured history in the deadwood with a foliage mass that doesn't look too pampered. I hope the pot can help connect the two "stories" into a convincing whole. Planting on a slab seems like it would work but not add much to explaining the tree.

I'm glad its still a bit away from repotting; I've got plenty of time to wrestle with this.

Hi Mike... Missed a bonsai club meeting last night to see the 'National Parks-- America's Best Idea' program. I think Potomac Viewing Stone Group would have had no members Sunday (when the series opened) if the meeting wasn't far-ahead enough to allow members to return home (some traveling from hours away).

Perhaps, the heaviest challenge for the viewer is to feel this tree's shyness. You ask about a pot before the tree is developed but certainly know where it is going. The "rough, tortured history" is especially strong but will you choose that as its whole story? The foliage on the backside of the flow of the tree (windward, right-side) should have a ragged profile which slows the eye & reinforces its slow, tortuous path. You could allow the leeward side a smoother, though still restrained, manicure which somewhat speeds the eye leftward. It wouldn't be best if seen like black & white, but the elegance gained to capture a grass-swept breeze coming out of the tortured windward crown could have some attraction.

I'd agree that traditional slabs & stone-mimicking pots are unimaginative for this tree. The authenticity of massive rock standing in its immoveability might be closer to elevating the tortured feeling from this bonsai, but there could also be an imaginative pot. It is highlighting the shyness of its potential burst of energy (never fully realized) that interests me in choosing. The tree has exceptional potential for display in an ordered arrangement, which is among its most earnest attractions.
_________________
... visit the U.S. National Bonsai & Penjing Museum, Washington DC USA-- http://www.bonsai-nbf.com

Mike,
a year or so ago I made a bunjin pot for an Aussie that had one higher portion on the rim as you describe. ( customer wanted the drip ) But, how about an idea where you have a man-made 'crack' in the rim that the dead branch travels through? It could even be a higher rim with the 'crack'. I had a shot of a semi-cascade I made like that but can't find it now. 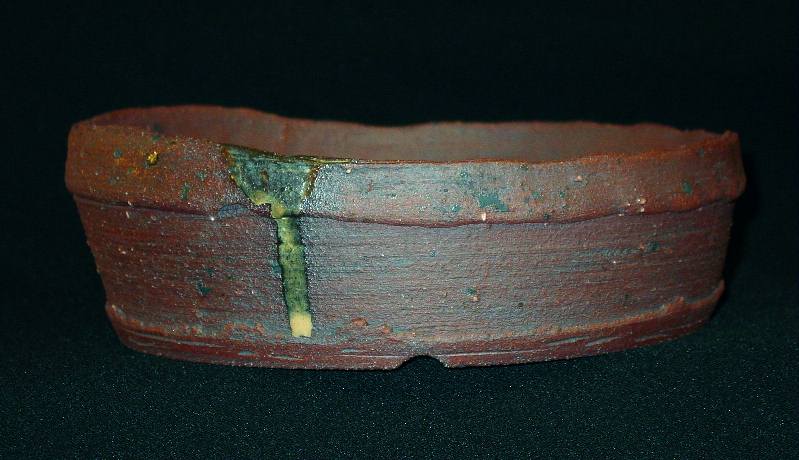 ) in a pot by Vlaanderen.

Lastly, some while back Tony Tickle had a pot/tree posting with that similar idea. Perhaps he can find the pics from that or find the posting.
Dale

Dale Cochoy wrote:Lastly, some while back Tony Tickle had a pot/tree posting with that similar idea. Perhaps he can find the pics from that or find the posting.
Dale 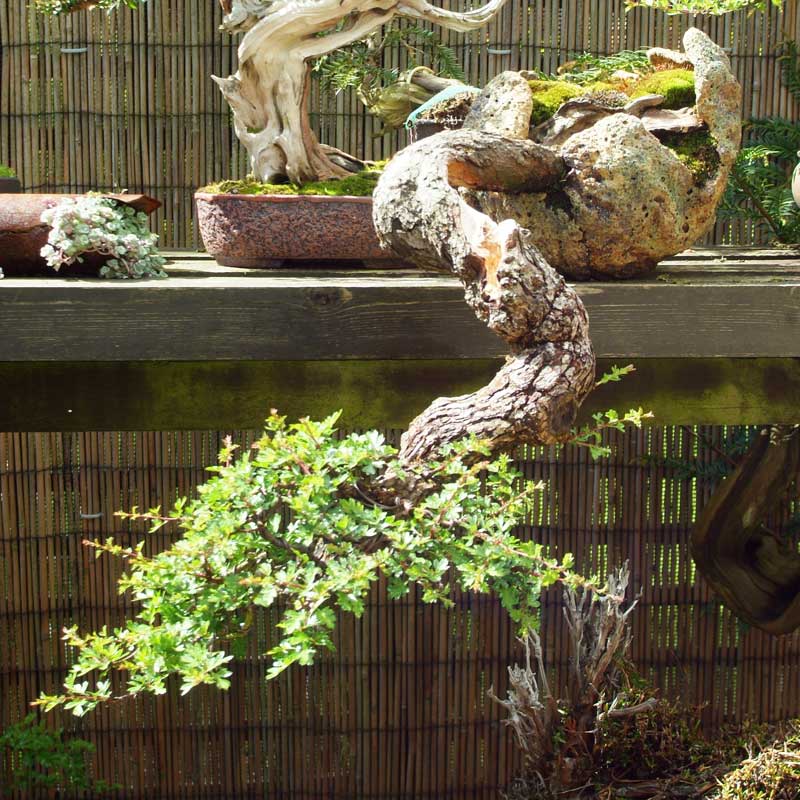 I like the idea of a pot with a "natural" fissure.

Here's a shot of the tree I made with a black background in case someone wants to do a virtual. 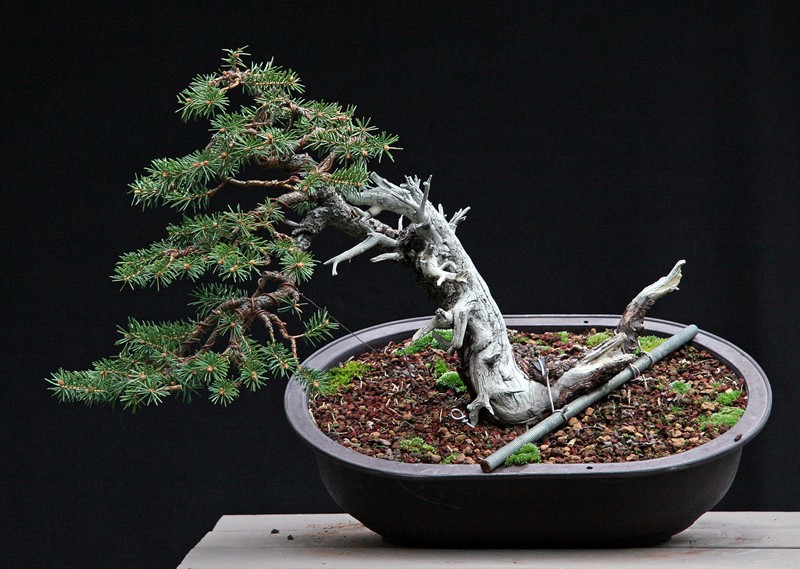 Here's an idea...the tree should be potted higher in the pot than it appears in the virtuals. 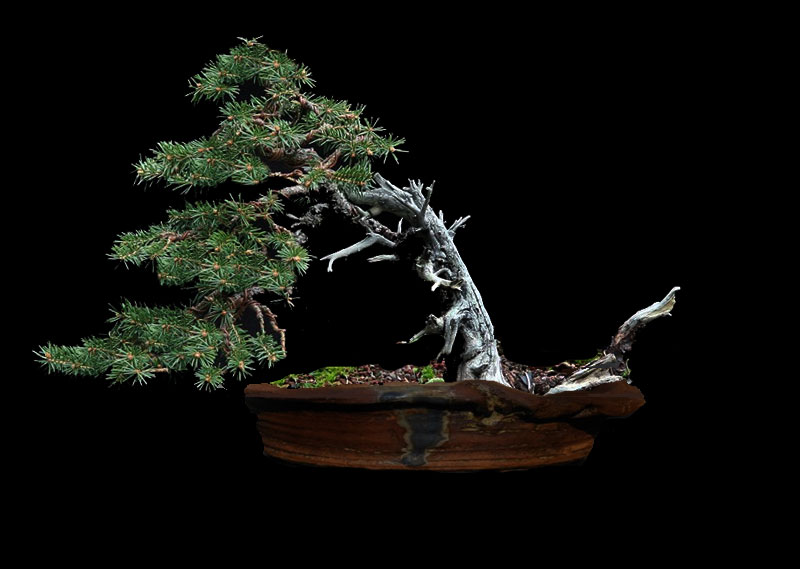 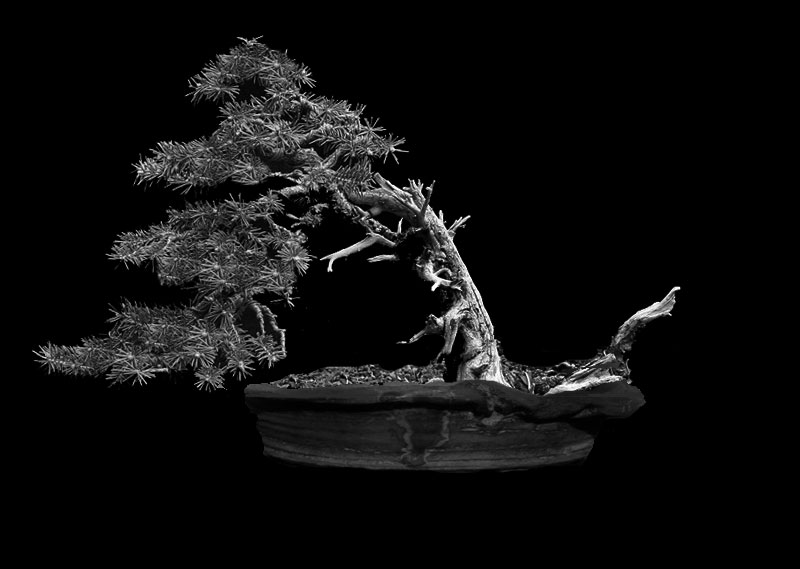 How about these pots ? 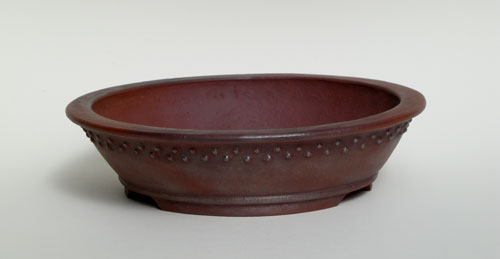 Mike,
I like your tree very much. It's got great character. I run into problems visualizing a suitable pot though, mostly due to the jin on the right. I think a conventional pot creates too much contrast & conflicts with the image the tree presents. I would hate to remove it though as it adds so much to the character of the tree.

Maybe someone is able to produce a virtual for you of this tree planted on a slab. The tree would need to be planted on the right end of the slab. The slab then extending to the left under the cascading branch to create some negative space. An suitable accent planted at the base of the tree may also be a good idea.

Also, is it somehow possible to pull the jin and the tree closer together visually (planting angle, mechanically etc...)

Saburo Kato's book on forest and rock plantings has many inspirational examples that may help you in your search for the right pot or planting method.

Peter,
The round pot pictured last is excellent. Is it available on your website in a small size?

Dale Cochoy wrote:Lastly, some while back Tony Tickle had a pot/tree posting with that similar idea. Perhaps he can find the pics from that or find the posting.
Dale

I think that was the one I was thinking of Tony. I think that IDEA is the ticket for Mike, but not in a 'scoop'. I like the idea of a pot with a crack to relieve the root because the pot could then remain smaller, shallower and the tree more centered in the pot.
Dale

I think for this tree, there are several possibilities for a pot.

1. A plate is good.
2. shall be governed by the savage dead wood, fits a rough pot.
3. one aimed at the crown of the tree fits a smooth surface or a classic pot, because the crown is symmetrical and finely focused.

This is also a matter of taste.

Mike,
My first impression (first photo) saw the tree struggling on a windswept upper ridge in a sub-alpine environment. IMHO I think that a pot wouldn’t allow the full story to be accurately told. So I’d try and find a rock(s) that would have the base of the tree just to the right of centre. Also as you mentioned in order to make the foliage look less “pampered” you might want to put some dead branches within the top of the tree, which would portray the continued life struggle this tree experiences.
Cheers G.

Thanks all, lots of great ideas.

Earlier in the thread we discussed the idea of some unconventional pot for this tree. That's the way I'm leaning at the moment. So I'm partial to Dale's idea of a pot with a crack in it to accommodate the jin. A rough color and texture would complement the rough bark.

But I'm still open to suggestions...

These are my favorites.. -dorothy

Mike,
I see it is in a fairly deep mica training pot.
What do you think will be the final depth of pot for it?
I see lots of ideas using pretty shallow pots , or slabs. I'm wondering just how shallow you figure.

Here's a few ideas. Just picture them with a man-made crack pulled into the side. 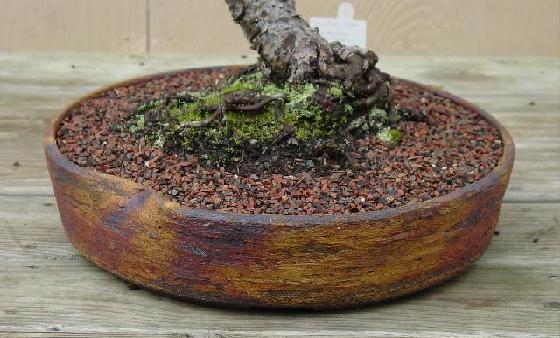 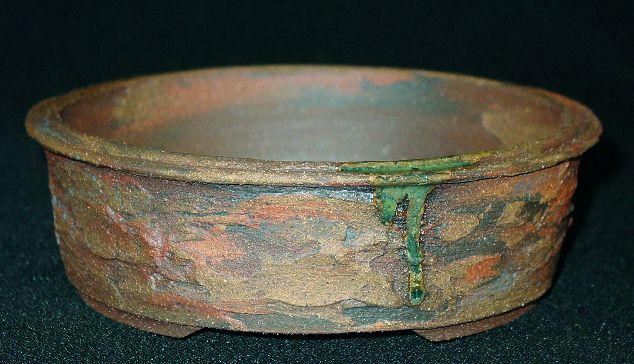 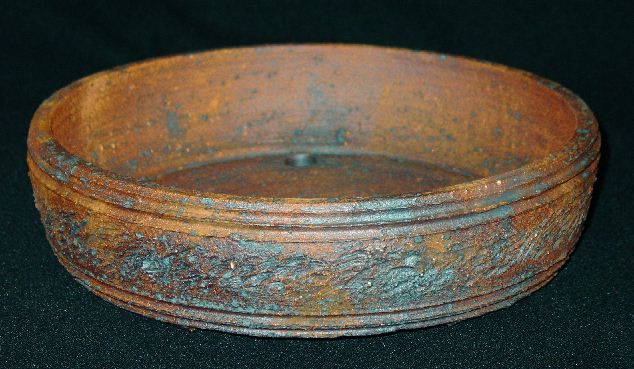 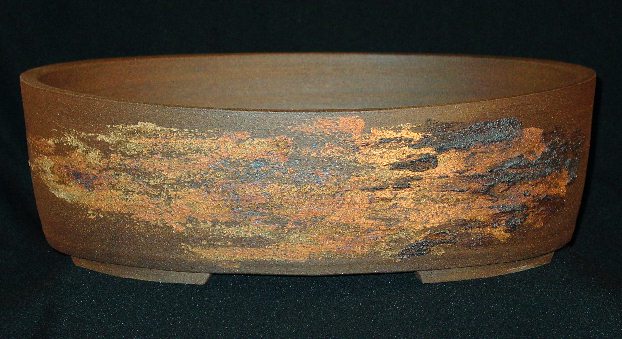 What I'm gravitating towards is a less conventional pot, more like a super-assymetrical nonban. I really like Dale's crack idea.

If I don't go in that direction,, a slab would be a nice, more conventional, choice as Dorothy illustrated. Perhaps a slab with a raised right rear to suggest the rock face it might have grown against. BTW Dorothy, I don't think I'd ever make the trunk that upright; certainly not vertical as you showed. This tree grew at that angle because of its environment. I'm hoping to capture that feeling in the whole presentation. As Chris pointed out, it should make for an interesting formal presentation. I really liked the color and texture of the third pot. Whose pot is it?

Most of all I want this to feel like a tree first, bonsai second.

PS It just goes to show you, taking a photo on a uniform background makes virtuals that much easier (and fun for those making them). Guess I'll refrain from getting lazy an just shooting trees against my house.

Mike, I like your "raised rock-face to the right rear" idea, I think this would balance the angle of the tree and enhance the overall image.

That's the one I would prefer.....oval, more plane, for this is a "fine" tree....with a few scars to match the trunk. 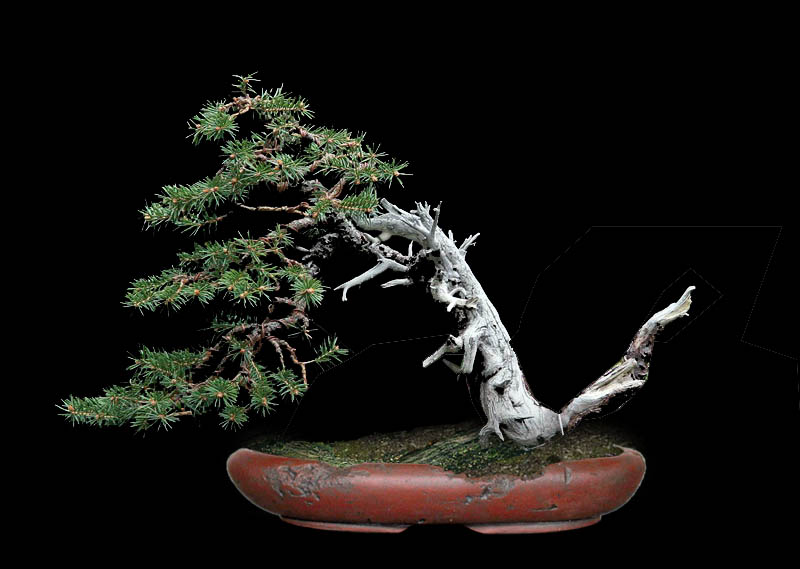 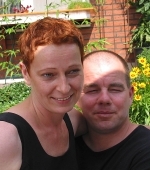 Great friend ...
Beautiful tree. I shorten a little jin and put in a vase like this: 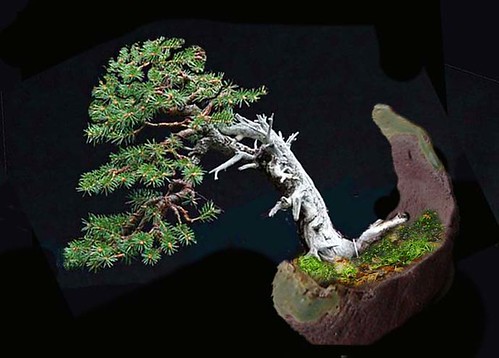 Hi Mike,
Good to see you posting here! I think you should plant your tree on a rock slab or a slab made to resemble a rock. Peter Adams had some cool ideas in his book. He made them with fiberglass and cement. It would reinforce the natural feeling the tree has already. Nice Job!
Geof

Very nice tree and thinking this far in advance I am sure you will find the perfect pot. So far I am for the rustic look, here is another virtual to consider. You can have the twisted movement in the deadwood reflected in the bends and turns of the free form pot. 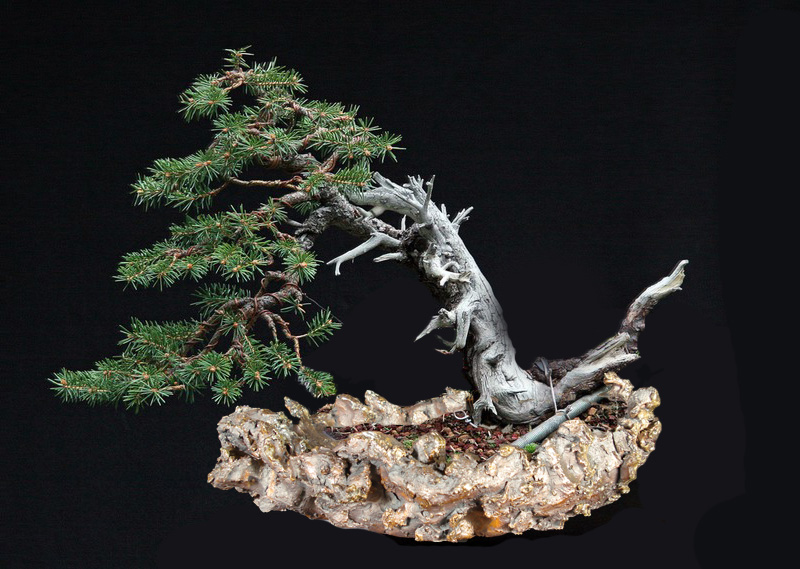 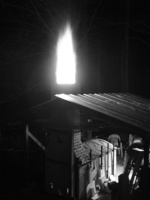 Robert Wallace wrote:Very nice tree and thinking this far in advance I am sure you will find the perfect pot. So far I am for the rustic look, here is another virtual to consider. You can have the twisted movement in the deadwood reflected in the bends and turns of the free form pot.

That's a nice pot. This is more along the lines I was thinking. The virtual is clumsy, but I like the suggestion of the environment of the tree to the right. Hope you get the idea.

Dale's idea of a notch for the jin is incorporated here. 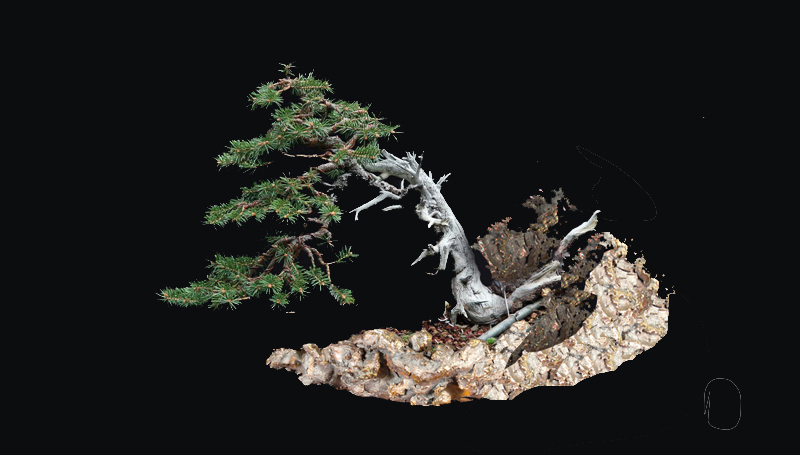