I bought this tree last year. Not quite ready for a picture. I was told it is named 'Nishiki.' I can't find anything about it. Has anyone ever heard of this cultivar?
Iris

sorry...dont have any spcific info on that per se...but i might be able to help a little atleast..."nishiki" in japan was originally used to describe fine colorfull silk usually woven with red, gold, or silver...it is also used to describe beautifull things (usually having to do with color, (especially reds, yellows and oranges)...when refering to a plant, it could mean that the leaves turn a very decorative color in fall...thats why you can see it used on maples a lot...an example being acer palmatum 'kiri-nishiki'..."kiri" in japanese means to cut...so when combined in describing a maple "kiri nishiki" would mean that it is a disectum variety with brilliant or showy red/orange fall color...it can also be refering to flowers as well though...and can also be refering to variegated with yellow, red, or orange sometimes i believe...

so...it is most likely a variety of pomegranate that has very nice fall color, and most likely is a brilliant red, or red-orange...


care is most likely the same as any other punica...

hope that helped a little.

Very interesting, a google search turns up nothing at all of the variety. Where did you acquire it Iris?

I got it from Pauline Muth, who bought them from a non-bonsai nursery. She had no other information. It is not a registered cultivar. It hasn't bloomed for me yet, because I am training it. Bill V. had an old list of 40 pomegranate cultivars, but not this one.
Among plant people, Nishiki is usually translated brocade. It is applied to plants with multicolored flowers or variegated foliage. Nishiki-matsu is cork-bark pine. This cultivar is said to have red flowers & oddly shaped fruit. The name might refer to the crepe paper texture of pomegranate flowers. Or it was pulled out of a hat.
I would like to find out more, because so far it is the fastest growing and most vigorous pom I have ever had.
Iris

Given the pome's propensity to vary greatly from seed it may be a new variety. If it has traits that you like, asexually propagate (which is exceptionally easy with pomes).

I have a variety that is called 'Evergreen's Red Dwarf' because Brent named it so. It is supposedly a seedling from Emperor.

milehigh_7 wrote:If it has traits that you like, asexually propagate (which is exceptionally easy with pomes).

I'm afraid you don't get the point. This is not a seedling. It is a cutting grown named cultivar. I am trying to find out who named it & where it came from. It is probably from Japan, but nobody seems to know.
Iris

Could it possible be Punica Granatum "Hizakuro"? Below is a link that may be helpful for looking up plant species in cultivation around the world .

Hope this helps in your quest,
Abe

im thinking maybe it is new and information is scarce, or maybe it was mislabeled by the nursery...or maybe the nursery just took the liberty of naming it "nishiki"...or, maybe it is known in japan but not here and our search engines arent pulling up links...either way, i sent a message to my friend in japan to see if he has any luck by searching the kanji or katakana for it...ill let you know if he finds anything.

It may well be known in Japan but not elsewhere. No, it isn't Hizakuro. The leaves on this are more pointed, and the color was described as solid red. Any information from Japan is appreciated.
Iris

Eastern Bonsai wrote:
Could it possibly be Punica granatum 'Hizakuro'?

Cultivar names take single quotes.
Close but no cigar. My tree is a dwarf, with one inch (2.54 cm) flowers.
It is coming into bloom. Will post a picture shortly. It may have come from a nursery in Korea.
Iris

Pomegranate is mentioned in many ancient cultures. Here's the Jewish tradition, from Wikipedia.
Judaism
Pomegranates were known in Ancient Israel as the fruits which the scouts brought to Moses to demonstrate the fertility of the "promised land".[74] The Book of Exodus[75] describes the me'il ("robe of the ephod") worn by the Hebrew High Priest as having pomegranates embroidered on the hem. According to the Books of Kings[76] the capitals of the two pillars (Jachin and Boaz) that stood in front of Solomon's Temple in Jerusalem were engraved with pomegranates. It is said that Solomon designed his coronet based on the pomegranate's "crown" (calyx).[70]
It is traditional to consume pomegranates on Rosh Hashana because the pomegranate, with its numerous seeds, symbolizes fruitfulness.[77] Also, it is said to have 613 seeds, which corresponds with the 613 mitzvot or commandments of the Torah.[78] This particular tradition is referred to in the opening pages of Ursula Dubosarsky's novel Theodora's Gift.[79]
The pomegranate appeared on the ancient coins of Judea. When not in use, the handles of Torah scrolls are sometimes covered with decorative silver globes similar in shape to "pomegranates" (rimmonim). Some Jewish scholars believe that the pomegranate was the forbidden fruit in the Garden of Eden.[77] Pomegranates are one of the Seven Species (Hebrew: שבעת המינים, Shiv'at Ha-Minim) of fruits and grains enumerated in the Hebrew Bible (Deuteronomy 8:

as being special products of the Land of Israel. The pomegranate is mentioned in the Bible many times, including this quote from the Songs of Solomon, "Thy lips are like a thread of scarlet, and thy speech is comely: thy temples are like a piece of a pomegranate within thy locks." (Song of Solomon 4:3). Pomegranates also symbolize the mystical experience in the Jewish mystical tradition, or kabbalah, with the typical reference being to entering the "garden of pomegranates" or pardes rimonim; this is also the title of a book by the 16th-century mystic Moses ben Jacob Cordovero.

What a well of Knowledge you are!

Thanks a lot for these very interesting references

This is what it looked like beginning of August. 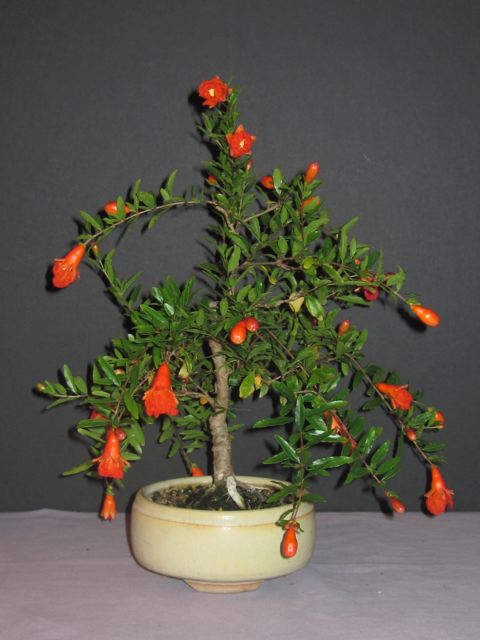 It was gorgeous the whole month. For our show tomorrow, it is all done except for a few spent blossoms trying to set fruit. There are more buds coming, but they probably won't open. I have to give it a rest before it goes back under the lights. Next summer I will try putting it in the fridge at night to delay blooming.
The name Nishiki was a total blind alley. Apparently it came from Korea but the grower refused to give me his name. However, he gave me permission to name it. I may pursue that.
You are supposed to eat pomegranates to celebrate the Jewish New Year, so your virtues will multiply like the seeds of the pomegranate. They weren't in the grocery store, so this is the best I could do.
Iris