After seeing Will Baddeley's English Elm displayed on a milking stool at Bonsai in Wales last year (photo below) I have been thinking about the possibility of using various non oriental style display stands for displaying non oriental style trees. This move really makes sense to me but I have very rarely seen bonsai displayed on tables other than those made specifically for bonsai and to Eastern traditions. I wondered what people's opinions were on using antique European/other (non traditional) tables for bonsai and would love to see if anybody has photos of any other examples of these tables in use.
Regards, Lee. 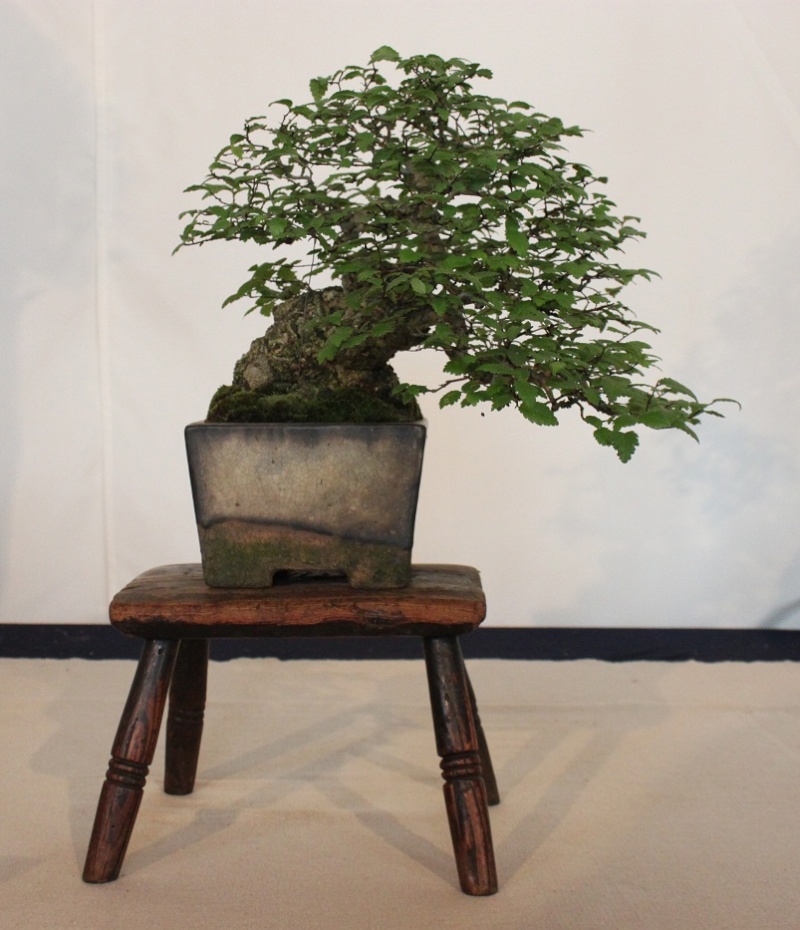 Hi Lee,
I see your "milking" this subject for all it's worth

Originally, Bonsai were placed on tables that were used for writing. I have a modern day table for writing that I use to display my trees along with tables made for specific use as a display table.

I see no reason why not to explore that opportunity...adding interest for the public to see and enjoy is a good move, I believe

Thanks Dick and JKD. It would be great if anybody else had any input.

That probably all have a bunch of expensive traditional tables and would hate for the fashion to change.

just for fun, what could we imagine that could be used in a three point display, that might focus more on the milking stool? A scroll picturing a pasture and grazing cows? a tenpai of a minature metal milking bucket? 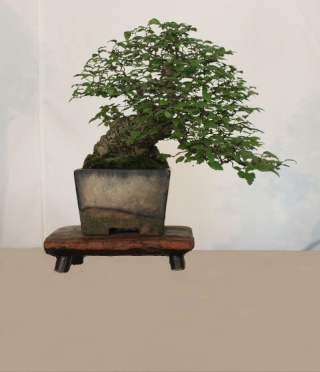 dick benbow wrote: what could we imagine that could be used in a three point display, that might focus more on the milking stool?

Cheese sculpture, but one that shows the season..I think...would be nice 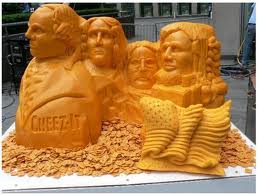 Hi Sunip. Will's original table/stool is quite long legged, but with the semi-cascading movement of this tree, I felt that it worked well. I guess that the length of leg would be a problem with a lot of non-bonsai tables. I have seen a few that I have thought about cutting the legs short.

Re: Antquie Tables for Bonai

I really like long beautiful legs,
they go so well with everything,
else...
stonener

I love the idea of using non traditional diplay stands, I also quite like the stand with the log and barb wire. Love your stool too, with the shorter legs it looks great, but dont ruin the antique!

I think the cheese sculpture is gross... sorry Big Dave.

Re: (Non Bonsai ) Tables for Bonsai

Hey Lee! here's a cheesier tall tale,
In 1978 my first bonsai show entry was a cascade elm,
It was a Winter Silhouettes Show in the leafless phase.
I was broke! no table and no money to buy the right one,
so I wrapped a concrete cylinder block(8x8x16")with old silk kimono fabric
then placed it on a long irregular burr G-ban, that also held accent Okimono.
right, wrong or indifferent! was the talk of the show and caused quite a stir.
sorry pokes no pictures, still trying to forget...

In my country there is an ancient adage (by Theokritos, greek poet 3rd c. B.C.) that goes like : poverty devises crafts/solutions

Dear Stonener, if I may say "on the contrary, these are valuable memories worth their place in your heart"

I posted earlier but, cannot see it- excuse my tech-ignorance please!!!!
I love the milk stand & it really suits the tree: the color, clear aged & chunky legs.
I love antiques & have a few ideas:
1. A Chinese wooden basin- these can be found in very formal styles to simple & utilitarian. normally they have legs but, some do not. A piece of glass inserted at the top would make a very interesting stand! (I've got a friend who does windshields & have been contemplating doing this) perhaps the water theme could be echoed w/ a waterfall suiseki or scroll depicting a countryside well? I'm a newbie near w/ me!
2. Antique rice boxes. These are normally simple & usually leg -less. Many have Chinese characters or small details. It could simply be turned upside down or a wood/glass insert could be formatted (getting the wood to match would be tough though) a stone slab top? I'm just dreaming. . . .

Here in the foreground is a foot stool or maybe a milking stool I found while on the trail of the Worlds longest yard sale....It works well with a nice piece of rain forest granite as a top. In the background can be seen is a rotating TV stand that I cut the legs off and made into a turntable. 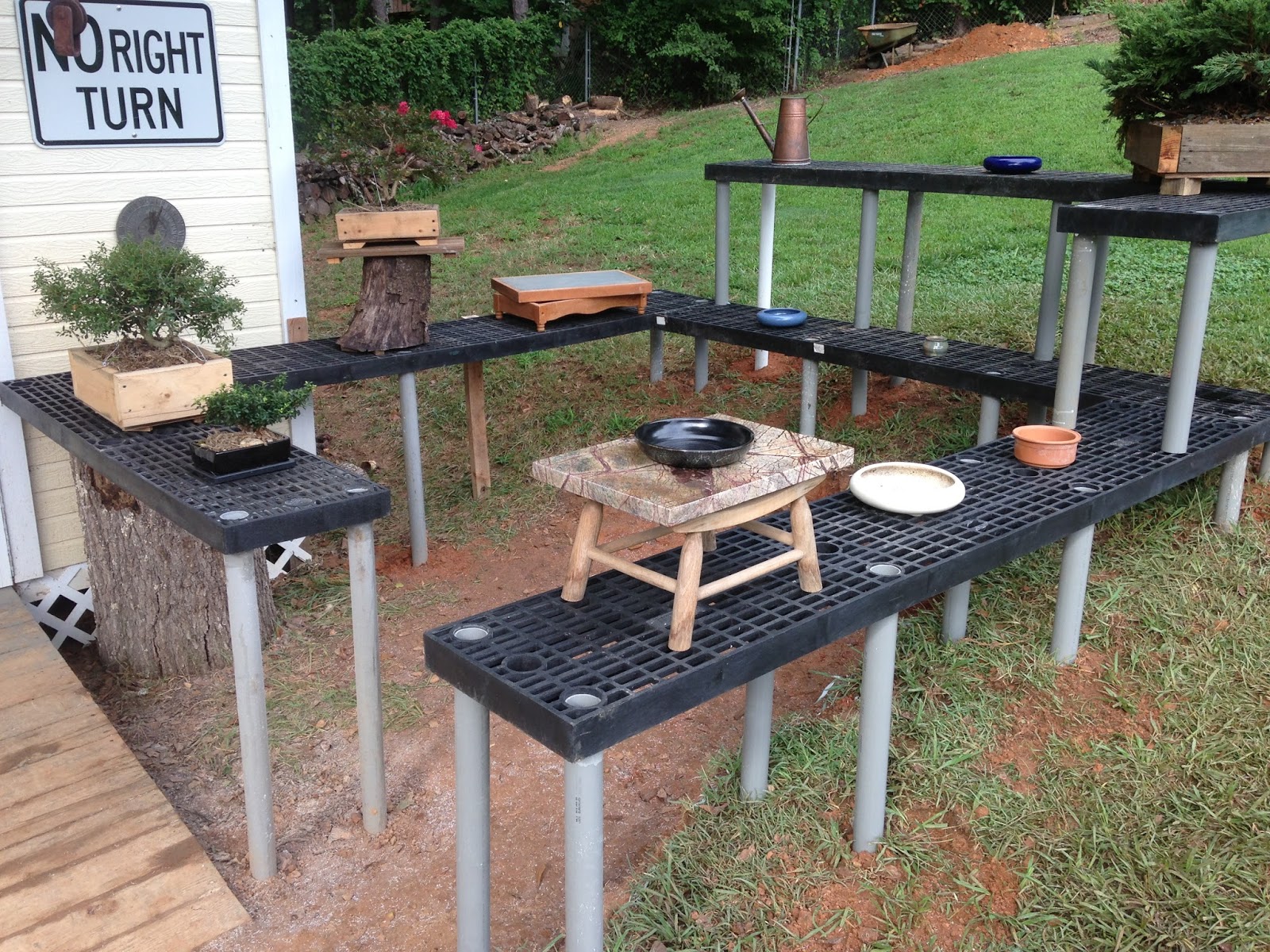 love the milking stool. what incredible wabi-sabi. I have a beat up oldel display table that evolks similar feelings of age and having "lived" life in it's usefulness. Appreciate your use of the turn table from humble beginnins.

Hey Lee!
I have been giving this idea a lot of thought! and have started putting it to practice.
I now agree with the concept and think American created pots,trees and viewing stones...

even if called bonsai and suiseki should be presented on American styled display tables,
even if Eastern influenced designed. I am trying Mission style for display tables,
made with beautiful American woods and naturally looking clear finishes and have moved forward.
I have already made several viewing stone stands using this concept, so far so good!...

Ok here's what I mean American, American on American, I personally have trouble with this idea!
Because I love the Japanese and Chinese Traditions so much, so I'm conflicted! some what.
But if were to move forward, Our style should also be considered, that is to say established?...

I am, expecting to eat a lot of crow over putting this in writing. My SENSEI would tell me!
"a closed mouth gathers no feet"
stonener
*no pain no gain*

stonener wrote: My SENSEI would tell me!
"a closed mouth gathers no feet"
stonener
*no pain no gain*

Or as my teacher said "yeah, yeah... the fish never was caught that kept his mouth shut."
lol
-PT

HEY PT!
Sounds like you know exactly!
What I'm taking about, ya buddy!
Been there did that, Right!...

Hey Dude!
Those great pots you made for me are part of this venture.
Just got done transplanting trees into both of them nicely.
Will send pictures in maybe about a year from now!
When I'm sure their not finished... 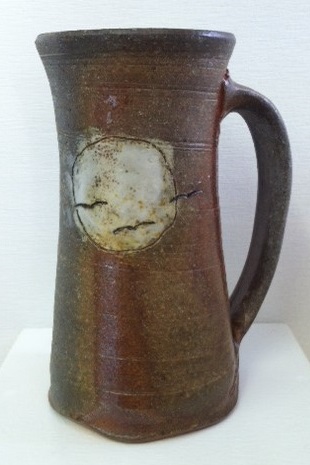 Hmm. No pictures yet, but I have a a pair of antique sewing machine stands that an aunt left me. One is made of cherry and the other of walnut. I use them as bonsai stands for display/photography, or for working the trees indoors because they are an ideal size, look nice, and aren't good for much else since I don't own a sewing machine.

I didn't know I was an avant-garde type of bonsai enthusiast.

The Christmas present for your self, or a friend