Our suiseki group is meeting this morning till noon for a class from Sean on daiza making.
Tomorrow we're off to the saulk river to hunt for prospects with Mr Smith. The class on daiza making and the opportunity to hear Sean's comments on our "finds" should be quite educational is advancing our taklents.

I'll try and cover highlites and provide a few photos to share.

Hello Dick,
We are waiting.
Sunip

Hi Sunip,
Trying to capsulize his presentation will be difficult. He told us the japanese way, which i wanted to learn.
He started his presntation by showing us the narrow line of educators from suiseki, each a student of the previous
and on down the line. So many things japanese have lots of different "schools".
In no particular order, here are tidbits i made note of.
Rosewood is the most popular wood to make daiza's out of. Mullberry ok for stands to show bonsai but not daiza's.
best wood is from India but other rosewoods will do. A way to come close to rosewood if not available is to use walnut wood with a mahogany stain.

Koji Suzuki is theee master of Daiza's in today's world. his workshop is about 6X8 foot. He uses very little tools that are NOT hand. 3 power tools only. His vice to hold wood in place by using his feet.

at the last Ganko Kai show 155 people attended and all by invitation. there are 25 members in this club and long list of those waiting. Someone has to die before your welcomed in. The buddist temple where this show is held was built in 1603

In 1964 the suiseki and bonsai display parted company in kokufu ten show for stones to take on their own.

At suiseki's last show for the Ganko Kai, there were 15 stones, since it was spring (april) 5 stones were in daizas and rest in suiban or dobans. In warm months this is the trend to show more water for the coolness.

The biggest complaints Mr smith had with our daizas were that the feet were too big in relationship to the stone. 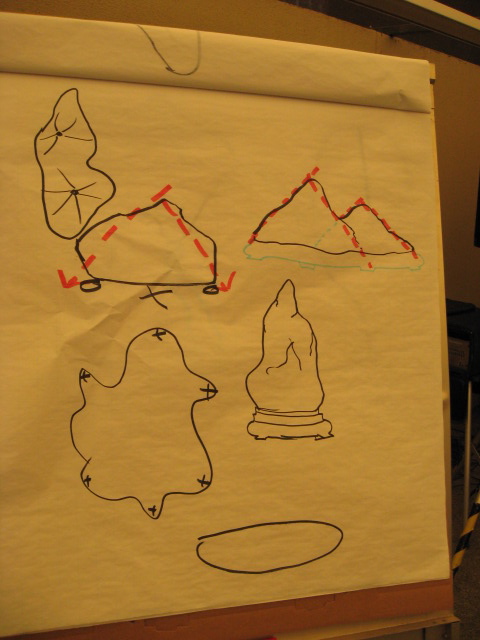 Hello Dick,
Thanks for the report on this magnificent occasion.
Seems you all got some good basic information from Sean Smith.
Did you encountered something in that river???
Sunip

Our river outing will be today, I'll be leaving in two hrs. At the end of the day we will have a get together at a restaurant to have a meal, and send Sean back home with our thanks. Talk about a tough decision, I was invited to go to Bonsai teacher, Ryan neil's dojo today as well.

dick benbow wrote:Rosewood is the most popular wood to make daiza's out of. Mullberry ok for stands to show bonsai but not daiza's.
best wood is from India but other rosewoods will do. A way to come close to rosewood if not available is to use walnut wood with a mahogany stain.

This is similar to the jikusaki on some scrolls. There is 紫檀 iShitanwhich is the rosewood and 紫檀塗り shitan nuri which is stained to look like Shitan. The difference is the price.

As for Mulberry as a Jiita or stand, I have been taught it is classified as a 行 Gyou Semi-formal material while the 紫檀 Rosewood and 黒檀Ebony (shitan) and (kokutan) are the formal materials...

I saw a interesting programe on the tv one day, It was about rosewood, who was very, very expensive...The programe said, only the rare "Yellow Wild Pear" was rosewood.

Interesting topic heh?
Appreciate the both of you sharing what you have learned. thanks!