Hello everyone I have a couple of questions about how much if any of the moss/ algae / lichens should I clean off the deadwood. I'm going to clean off the algae and moss on the live parts but I'm not sure about the deadwood . I know I want to preserve the lichen in the upper parts. Anybody have any suggestions about what to use besides a toothbrush and water? Thanks. 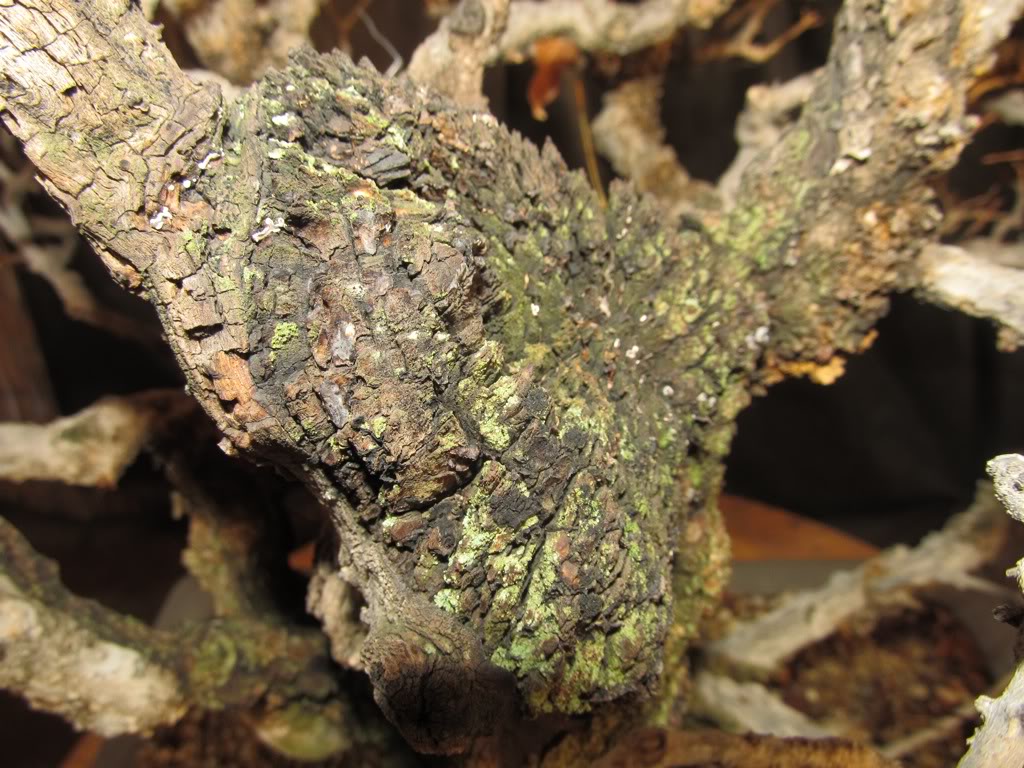 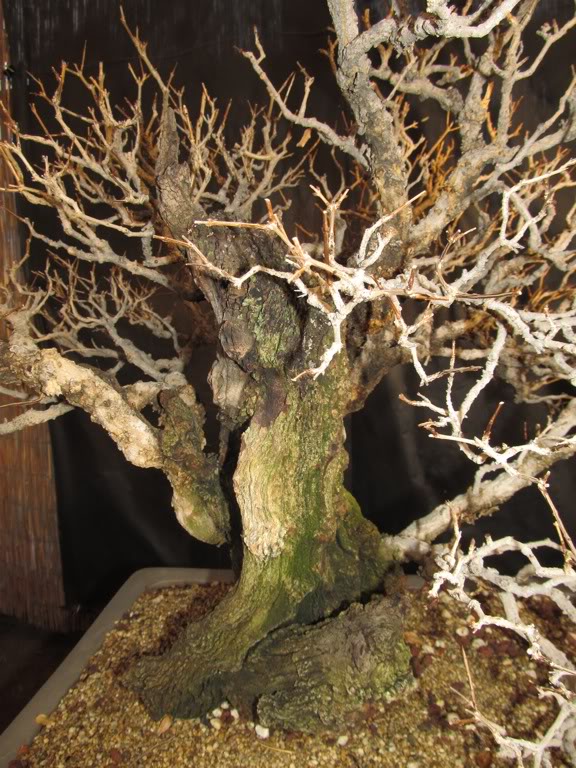 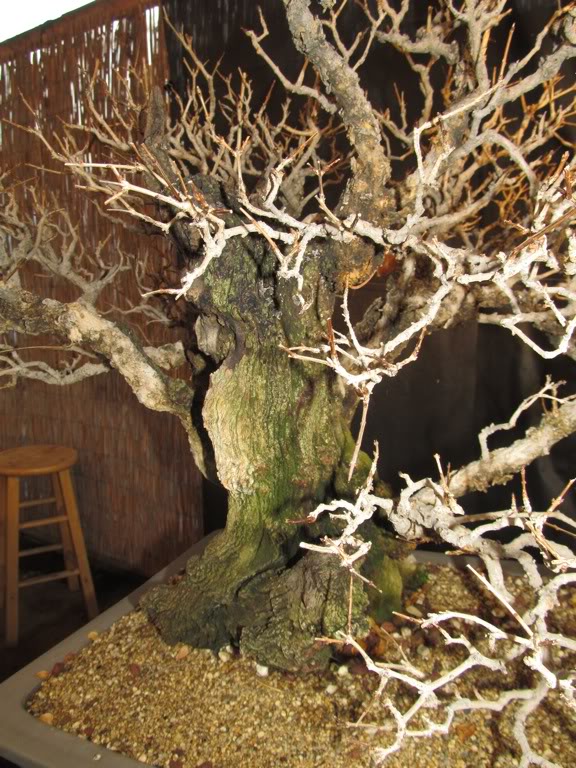 Vinegar & water works good for me, scrubbed lightly with a toothbrush. It will get rid of the green algae, but lichens are a little tougher to remove. I kinda like lichens on some branches, depending on the tree I guess. Nice old tree...what is it ?

Thanks Ed Its a pomegranate. I want to preserve the lichens. Do you think the vinegar would damage them?

Good Question, but I'm not sure. I usually try to cover the soil surface when I'm cleaning with water & vinegar, or applying lime sulpher, just to be on the safe side. I don't think vinegar will "kill" lichens, but maybe somebody who knows for sure will jump in here. I really like the old pomegranites you guys have in California !

the algae absolutely will have to go. Strong vinegar will do the job. You can even work with what is called vinegar essence here. It is too strong to use for eating. The acidic liquid will eat the algae. I use another acid which does the same job. No brushes, they will destroy the structure of the bark. My acid does not really harm lichen. It weakens them, for sure, but they come back while the algae disappear for a few months. The algae will come back though.
The acid works best when it is warm, like in the seventies or higher. Then it works immediately. her, around freezing temperatures it takes a few weeks to do the job.
I have the acid in a cup and use a wide brush as one uses for painting a fence. Then I brush allover everything, including trunk branches, nebari and all buds. I never had any visible harm. The surface of the soil will suffer, the moss will get brown where the acid hits it. Simply cover the surface with some kitchen paper.
Some folks ask whether it is dangerous if the acid gets into the ground. I never had a problem with this doing this with a thousand trees about two times a year.
Disclaimer: try yourself what is best for you and does not harm your trees.

I can imagenine that you get a similar effect with vinegar essence as with my biotreecleaner.

Biotreecleaner is a liquid which cleans bonsai thoroughly without harming the bark or the health of the tree. Green stuff like algae or moss will be removed dependably. Dirt will be burned by the acid. A fresh original color of bark will appear on most trees. e.g. Larches and pines will get nice brownish bark instead of dirty gray-black. In case one does not like the new look just do nothing for a couple of months and the former color will come back. Biotreecleaner sterilizes the surface of the tree. Bacteria, fungi and insects are impaired strongly. Biotreecleaner bleaches deadwood and also bark to a certain extent. So it fulfills the functions of of lime-sulphur in addition to removing green stuff thoroughly. Only the deadwood does not look like painted white a t all afterwards, but rather a natural color and texture of deadwood will appear. Some bonsai enthusiasts use biotreecleaner instead of lime-sulphur. The impact of biotreecleaner will last for a few months. During a vegetation period it is typically used twice or three times. Ordinary remover of green stuff as they are available in garden centers are typically not for usage on living plants. The 'bio' in biotreecleaner stands for application onto bonsai from the surface roots up over the trunk and deadwood into the fine branches, without this being harmful for the tree. Biotreecleaner has been tested on several hundred bonsai for a couple of years. Many of these trees were high class and some world class. The liquid has worked well in all cases and no immediate or long-term harm has been noticed.
Application of biotreecleaner:
It is possible to paint biotreecleaner onto a dry tree. But it is better to make the tree wet by spraying ordinary water onto it before. Then you paint onto every part of the tree with a large painter's brush.
You can, of course, only paint onto deadwood and all spots which are green or dirty. In daily work it is better to paint everything from surface roots upwards into every little branch. When the outside temperature is 25° C or warmer biotreecleaner works very quickly. First results are visible after a few hours and the effect continues for many more days. When the outside temperatures are low the effect is only visible after a day or even several days. The final effect is only visible after several weeks, but then it is amazing. The tree should not become wet with rain or watering right after application of biotreecleaner. Otherwise the acid will get onto the soil surface. This is not necessarily detrimental, but the moss will certainly be dead. If you want to be save, cover the soil surface with cloth or paper. When bitotreecleaner has dried on the tree surface once the tree can become wet again without problems. So it is OK to water the whole tree or to let rain hit it after a day. It is possible to clean the pot surface and kill all green stuff. In some very rare instances with higher concentrations the glazing can change color permanently though. After having applied biotreecleaner wait a couple of days and see the result. If there are still some green or dirty areas, apply there again. You should not overdo it and avoid getting too high concentration of this acid though. It is possible to spray the liquid onto the whole tree if there are no leaves or if the foliage is hard. Add water to it before spraying to have a lower concentration of salt. It is not necessary to protect the soil when spraying with low concentration in the field. The acid will be neutralized quickly when hitting the ground..
Safety considerations:
Biotreecleaner is an acid. It can be harmful for humans or animals. Try to avoid contact to skin. Never let it get into open wounds or mucosa and certainly not into the eyes. Absolutely avoid swallowing. If biotreecleaener gets onto normal skin just wash off with regular water. No harm will be done usually. If it ever gets into open wounds, mucosa or eyes, wash off immediately, put your eyes under water in a bucket and open them. Bes sure to store the bottle away from children and strangers. When applying with a brush use gloves and protect your face. When spraying, protection of hands and face is absolutely necessary. Do Not inhale when spraying. Biotreecleaner is deadly for algae, moss and small critters already at low dosage. If applied on trees onto bark and deadwood it is save. On small branches with green bark it sometimes can hurt a bit, but usually there is no harm. If it touches leaves or needles as a rule the is no harm. Sometimes small permanent changes in color can occur. In higher concentration it can permanently change color of pot glazings slightly. If it drips onto pots, clean with normal water quickly. Clothing that gets into contact with biotreecleaner will often bleach permanently. It is a good idea to add normal tap water to your bottle of biotreecleaner to have a lower concentration. If water evaporates, higher concentration of salt are the result and it will become more aggressive. Everyone is responsible for save application and storage. No liability can be accepted for improper usage.

I certainly don't want a new clean look so I don't think I'd use the biotreecleaner before a show. Maybe as a regular maintenance thing. I'll have to look into that.
What I really want to do is remove the algae while keping the lichens and the coloration in the wood.In the above pictures its wet because its been raining . Here's a picture with the trunk dry. 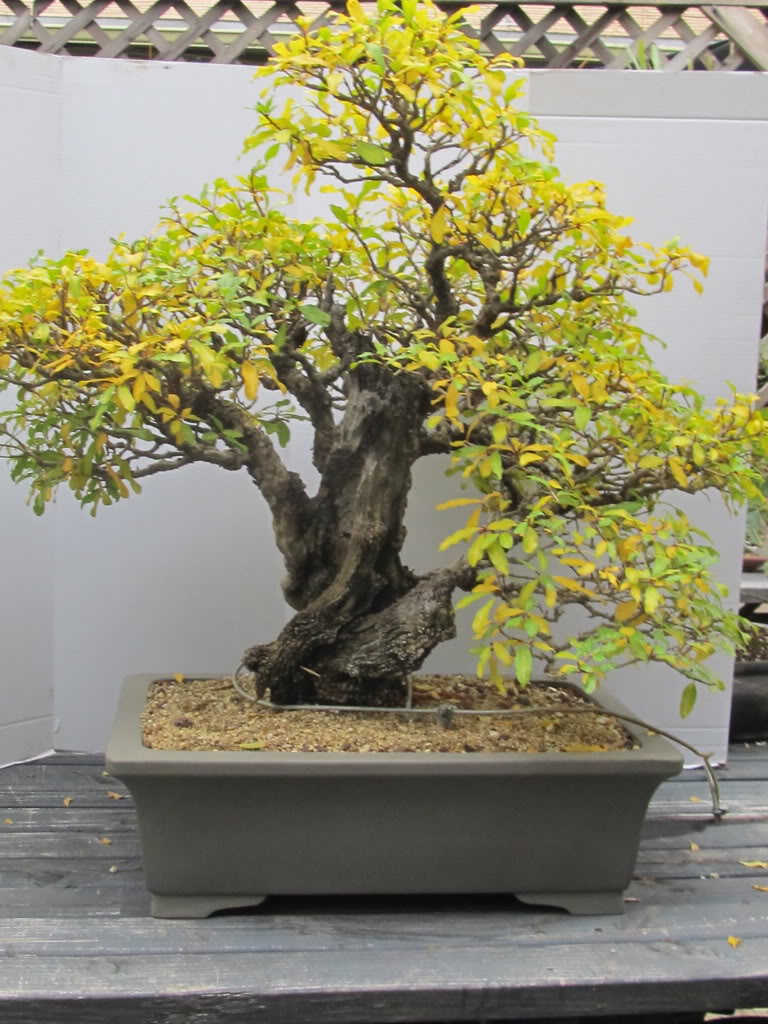