Well, the tree I have had so much issues with before, mostly cause of too little knowledge, are giving me some time to think.
I have two of the same species. One small and one big. They have been doing ok the whole time. Growing slowly in the windowsill.
I have been thinking like a madman and found out there isnt much I can do to make them into good bonsai trees, mostly because they have those s bends on the trunks. So now, or about a week ago that is, I have repotted it into the same pot as the big one, having them close to eachother. Hoping that it will by some point fuse a bit together, or make it a little interesting.
I have been watering like I always have. It gets the same amount of sun as before. But, I do keep the heat up by fire, not electricity. Thats the only difference. And now they are dying. The leaves are going bright yellow. It starts from the edge of the leaves and like drawing the color out of them. The branches are also dying. Some new shoots are there, but they arent growing at all. Some are turning black at the tips and dying slowing inwards the branches.
Any ideas why? Was the repotting too much? I didnt do anything to the roots. Just placed them together in the pot.
Any help what so ever is very much appriciated. I know it can be tons of reasons.

I always though blackened leaves were a case of over watering. But it seems like you have both blackening and yellowing. Seems strange.


How long did it take to see these changes after re-potting?

<<It gets the same amount of sun as before. But, I do keep the heat up by fire, not electricity.>>

You have a wood fire? First of all, your humidity is probably near zero, less than healthy for a cactus, never mind a Ficus from the jungles of Asia.
Wood fires indoors produce ethylene gas. In small amounts it may not bother most plants, but if it has been cold out, your fire may be producing toxic amounts of ethylene.
Iris

Its probably because of that. Hmm, what should I do then? I cant start heating up by elictricity. It would cost too much since the place we live now is much bigger. Its way too cold to put them outside too. Would they die on me if it goes a few more weeks?
Its strange though. I have a sageretia. It was losing every leaf and branches was dying. When I took it here, it thrives.

Storm wrote:Its probably because of that. Hmm, what should I do then? I can't start heating up by electricity. It would cost too much since the place we live now is much bigger. It's way too cold to put them outside too. Would they die on me if it goes a few more weeks?
Its strange though. I have a sageretia. It was losing every leaf and branches was dying. When I took it here, it thrives.

In that case, there may be something else wrong with your Ficus. March is not a good time to repot tropicals, including Ficus. You should have waited until April or May. Did you change your soil mix? Meanwhile, be very careful of overwatering. Let the soil dry out some between waterings.
Iris

Hi again. I didnt change anything in the mix. Almost every tree I have is planted in pure cat litter.
Okay. New update of the tree. I took a close look today. It had several new shoots. They are all dead. Turned black. The soil isnt wet over a long period. It was starting to get a bit dry so I watered it. I cut of a piece of the branch, and it was dried out on the inside. So I cut further in. The whole top branch were dead. So I took the lower ones. Same result. I cut into the trunk. Dried out. Then I scraped a bit on the trunk far down, and it was green. So some of it is alive. Atleast a little.

Here is one of the branches: 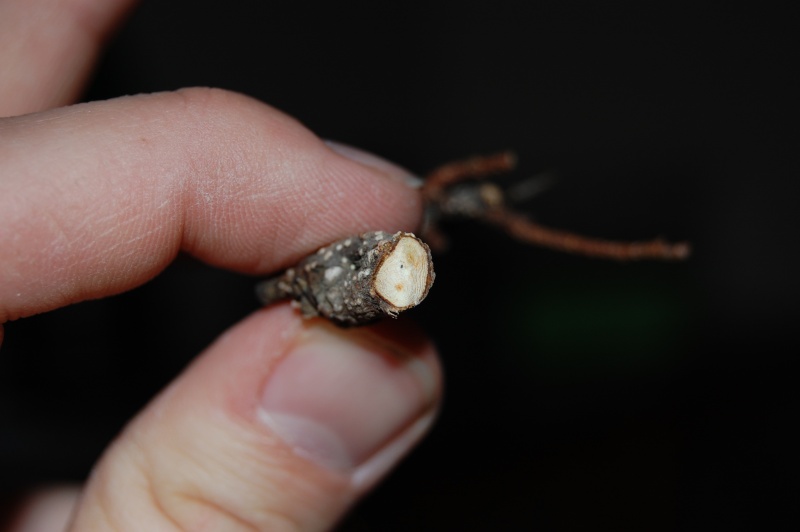 The leaves that were on the tree were very soft. They came of by the smallest touch. They werent yellow like some of those earlier.
So I have now cut the trunk off. Its about 15 cm high now, with 1 low branch. Hoping for some buds to appear, but I think the tree is doomed.
Well, It was one of my 2 bigger bonsai trees and I really liked it. I simply cant figure out what I did wrong.
It was a problem maker last year too. It stood in my windowsill getting alott of sun. Then some branches died the same way. Then I put it outside and it was growing like never before. It was standing with the window open 24 hours a day. It was much warmer then.

My guess -- and it is only that -- is that its death was (is being) caused by repotting at the wrong time of year.
_________________
Jim Lewis - lewisjk@windstream.net - Western NC - People, when Columbus discovered this country, it was plumb full of nuts and berries. And I'm right here to tell you the berries are just about all gone. Uncle Dave Macon, old-time country musician

Yeah, thanks Jim. Ill be more carefull when I do it in the future.

If I recall correctly you live in a very northern European climate.

I doubt repotting could kill your ficus more than likely it is too cold in your window and that is killing your tree.


Keep the Ficus warm and moist but not wet.