This is just a random idea I had and I wanted to know if it could work. I was told that roots do not stop growing until the temp stays below 40 degrees. If I have a tree that roots very easily do you think that I can successfully get an air layer before the end of November? The tree/s im thinking of is a american elm and a winged elm.

(if you want the top section dont risk it, if you want the lower bit and were just trying to get an extra tree from the top then you've got nothing to lose if it fails)

I know not to rush it, Im air layering tree out in the woods in my back yard. None of them are important so I might just try it and see what happens. Quick question: Do any body know why in one of my air layers the beginning roots, or white bumps, didnt turn into roots just more and more white bumps/growths? Because I got the beginning roots on one air layer and they turned into nice roots.

The ring was pretty wide but ill try that thanks for the advice.

You may have left some of the cambium layer on. Just re-do it in the spring.

I read that wiping the cadmium area with alcohol after scraping it will help prevent bridging back (it kills/dries the cadmium). Others also apply wire tourniquet as extra insurance. Try either or both 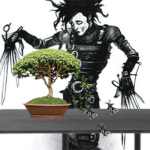 Jake16 wrote:This is just a random idea I had and I wanted to know if it could work. I was told that roots do not stop growing until the temp stays below 40 degrees. If I have a tree that roots very easily do you think that I can successfully get an air layer before the end of November? The tree/s im thinking of is a american elm and a winged elm.

Everyone has given you sound advice, but I encourage you to go ahead with making one or more layers now if you are wanting to experiment. For the reasons Marcus gave, you are not likely to get much in the way of roots before leaf drop this year. As long as a damp growth medium (e.g., sphagnum) remains around the girdle, the branch will survive and the rooting process will automatically begin anew next spring when the tree leafs out. I've gotten many layers to develop roots in the second season that failed to develop in the first. You should periodically inspect the girdle until you see emergent roots and correct any problems as they arise (the adventitious roots tend to be very easy to break off, hence the reason to stop inspecting when you see their beginnings). Of course, you could compare results to girdles you put in place next spring.

Also, there is the well-known 'juvenility' phenomenon. First is that the ability to form adventitious roots tends to decline generally with the age of the tree. The second aspect is the ontological age which is (for me) counter-intuitive. What it means is that adventitious rooting is most likely near the ground and becomes more 'difficult' as the position is closer to the branch tips. So, you might try layers at different positions if you are wanting to experiment and learn.

Finally, in the line of experiments, try doing air-layers with a pot of Turface (or similar bonsai 'soil') versus the traditional sphagnum in a plastic bag. One problem with air-layering with sphagnum is that one gets semi-functional roots that need to be potted in time to fully develop and harden before the season is over. With a pot of Turface this happens 'simultaeously' so the layer can be left on the tree longer and have a more vigorous layer before it is harvested. The main disadvantage, though, is that you likely will need to water the pot of Turface daily whereas the bag of sphagum is pretty much care-free in this regard.

So, in the next 12 months you could learn about

Exploring these items is a lot of air-layering. And there is also the contentious myth/fact about .air-layers being in series on the same branch to explore if you are really wanting to get into air-layering

I 'think' it was Walter Pall who uses a torch to burn the remaining cambium off. I tried this method this summer, in addition to a wired tourniquet, and had great success.